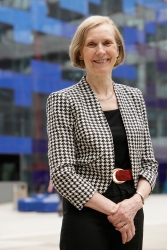 “The latest IPCC report sets out the options available to stop further climate change. Now it’s up to the private, public and academic sectors to come together and collaborate on new solutions. Only by harnessing these networks will we reach these solutions – large and small, local and global – that we need,” said Ritter.

“The good news is that major scientific and entrepreneurial efforts to stop further change are already well under way. At Climate-KIC we are supporting hundreds of companies and projects across Europe that are focused on overcoming the challenges of climate change in a variety of ways,” she said.

Climate-KIC is the EU’s main climate innovation initiative. It is Europe’s largest public-private innovation partnership focused on mitigating and adapting to climate change. Climate-KIC consists of companies, academic institutions and the public sector.

The public-private partnership is partially funded by the European Commission through its European Institute of Innovation and Technology (EIT) – which has confirmed an initial €63 million grant for 2014 – and receives financial and in-kind support from over 200 businesses, universities and public bodies across Europe.
Contact
Climate-KIC
Angela Howarth, Head of Communications
+44 (0) 78 7285 0084
www.climate-kic.org