Mesa Arizona Residential Community was looking to upgrade their parking area lighting without having to run power lines. Solar Power was their first option. 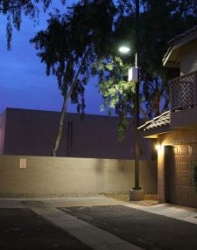 Torrance, CA, June 21, 2014 --(PR.com)-- When residents of the Park Centre Casitas residential community in Mesa, Arizona, got together and hired a security company to survey the property and suggest ways to keep it safe, the security company suggested adding perimeter lighting.

Having received approval from the city’s utility department, residents of the complex, which consists of 192 condominium-style units in 25 buildings a few blocks north of downtown Mesa, first considered conventional lighting. After receiving a few quotes from various vendors, it became apparent that the cost would be too great, not to mention the inconvenience, time and installation hazards. They began to look for alternatives.

The city’s Energy Resources Department encouraged them to take advantage of its just-launched solar pilot program for customers in its electric service area. The program provided financial incentives and, if they used LED lighting powered by photovoltaic panels, there would be no additional cost for trenching, underground wiring and expensive power poles.

A modern-day urban retreat surrounded by the Sonoran Desert and with over 325 sun-drenched days a year, solar energy opportunities abound in Mesa — the third largest city in Arizona, some 15 miles east of Phoenix. The Park Centre Casitas residents decided to accept the city's offer.

This brought them to LEDtronics. With the help of the local representative, Howard Industrial Sales, a shipment was arranged of 10 shoebox-style LED luminaires specifically designed for alternative-energy sources. Operating on a voltage input range of 10-to-30VDC, the LEDtronics SLL003-400-TPW-10/30VM3 units consume only 23 watts and can replace metal-halide area lights up to 100W. They are ideal for parking lots, parks, walkways and pole-mounted area and periphery lighting.

In addition, for a desert city like Mesa, LED lighting reduces light pollution — no wasted light, and conforms to the international “Dark Skies Initiative.” The City completed the installation, including the LEDs, solar panels, battery boxes and light poles. Four lights were installed, with the rest reserved for emergency service and replacement. Now the residents feel safer strolling after dark to the ball field where the Chicago Cubs have their winter home, within walking distance from the Casitas.

In a bid to pursue a more energy-efficient, healthy and sustainable environment, the City of Mesa so far has installed over 840 kW of renewable solar energy inside its service area, and more solar projects are in progress.