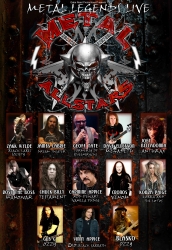 Los Angeles, CA, August 21, 2014 --(PR.com)-- After a successful Eastern European tour last Spring, the Metal All Stars are returning to conquer the rest of Europe this fall with some exciting new additions to the line up and dates across Europe.

Current confirmed dates will include stops in across Europe and will feature an evening of metal classics being performed in different line-up configuration with sets that include renditions of all the performing artists’ respective classics.

Tickets may be purchased at www.metalallstars.com

As a tribute to the fans, The Metal All Stars will host VIP Meet & Greet events in each city of the tour which will give the fans an opportunity to meet their favorite Metal All Star and get free merchandise. Tickets to the VIP events may be purchased at www.eventbee.com/v/gabereed2/boxoffice

The Metal All Stars was formed by Gabe Reed Productions as a way to give the world’s metal fans an opportunity to see metal legends in one blockbuster show. As Gabe Reed commented, “as a metal fan, this is the show that I always wanted to see – 2 plus hours of legendary metal!” Gabe Reed Productions is a global production and touring company, that has, in addition to the Metal All Stars, organized international stadium shows/tours for powerhouse artists including KISS, Mötley Crüe, Guns N’ Roses, and Rock N Roll All Stars that featured Gene Simmons of KISS, along with members of Guns N’ Roses, Def Leppard, Deep Purple, Alice in Chains and more, and was featured on the season finale of the highly successful television show ‘Gene Simmons Family Jewels.’

The participating artists are looking forward to the Metal All Stars next tour as much as the fans are. As Zakk Wylde stated, “The Metal All Stars are back and we are going to bring the metal!” Additionally, James LaBrie, “I am psyched to be a part of the Metal All Stars tour with an incredible collection of singers and musicians. Come on out and let's make it a memorable evening that is going to rock!”

It’s not often that such a stellar cast is assembled for one tour, and sharing one stage. Soon, lucky European head bangers will get a chance to get a mega-dose of metal on a single night, with the upcoming 2014 Metal All Stars tour.
Contact
Gabe Reed Productions
David Sousa
424-274-4715
www.metalallstars.com