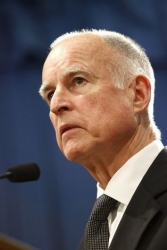 Sacramento, CA, September 27, 2014 --(PR.com)-- Governor Jerry Brown signed Assembly Bill 1559 into law today which will implement newborn screening in the state for a deadly genetic disease called adrenoleukodystrophy (ALD) that affects approximately 1- 15,000 children. Evidence suggests that newborn screening can save lives and drastically reduce long-term private and public healthcare costs. AB 1559 was sponsored by CA based non-profit The Myelin Project and authored by State Assemblyman and Pediatrician Dr. Richard Pan. It received unanimous bipartisan support in both the state Assembly and Senate.

If left undiagnosed and untreated, ALD can cause severe brain injury accompanied by a progression to a vegetative state, and eventual death in most cases before the age of 8 years old. Bone marrow transplantation has been proven to stop disease progression, however, it is only effective when performed before the onset of disease symptoms.

The grass roots campaign was led by three mothers and advocates affected by ALD, two of whom have lost children to the disease: Patti Chapman of The Myelin Project, Gina Cousineau of Be a Hero Become a Donor Foundation, and Janis Sherwood of Fight ALD. They were backed by several other non-profits, medical institutions, doctors, researchers, and ALD specialists throughout the country. Jeremy Hill Jr., a Bakersfield teenager affected by ALD who received a successful bone marrow transplant, spoke in front of the Senate Health Committee Hearing receiving an emotional standing ovation.

New York Governor Andrew Cuomo signed similar legislation for ALD newborn screening last year in his state, and as a result, children are being diagnosed and effectively treated. Being the largest state in the nation with the most annual births, screening in CA will mean accurate ALD diagnoses, timely and effective treatment, and informed genetic counseling for a large population.

ALD gained temporary fame in the early 90s as a result of the critically acclaimed 1992 film “Lorenzo’s Oil” directed by George Miller documenting one family’s fight to save their son’s life by inventing their own treatment still in use today. For more information please contact: The Myelin Project at info@myelin.org | www.myelin.org | P.O. Box 39 | Pacific Palisades, CA | 90272 | USA.
Contact
The Myelin Project
Greg Benton
310-795-1275
www.myelin.org