ASD Publishing is proud to announce the release of Stephen Kitsakos's debut novel, "The Accidental Pilgrim" that explores the intersection of science, religion, and the unexplainable while crossing several decades. 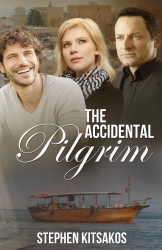 In the summer of 1974, Dr. Rose Strongin, a marine biologist, disappears for three hours on the last day of an archaeological dig at the Sea of Galilee. She has no memory of the disappearance, but it causes her to miss her flight home to Canada. That plane, TWA 841, explodes over the Mediterranean killing all aboard. Twelve years later a discovery is made, and she begins to put the missing pieces together. But it is not until after her death, when her family gathers to say goodbye that her secrets start to make themselves known.

Kitsakos is a theatre writer and journalist as well as the author of three opera librettos. His current project is the opera adaptation of Khaled Hosseini's international bestseller "A Thousand Splendid Suns" all with music by Sheila Silver. Other librettos include the Sackler Prize award-winning "The Wooden Sword” and "The White Rooster: A Tale of Compassion" for the Smithsonian Institution. His work often explores the connection between religion and art. He divides his time between Key West and New York.

"I've known Stephen as a writer, composer and journalist for years," says ASD Managing Editor Greg Goldston. "When I read the first manuscript of his debut novel, I was blown away by the amount of historical research he had weaved into this captivating fictional story. After months of working back and forth on this very layered story, ASD is thrilled to be able to share it with the world."

Author Sharon Boorstin calls it, “A beautifully written page turner that reveals the strength of family relationships against the backdrop of a mysterious archaeological discovery in the Holy Land.” Author Paul Pines adds, “A riveting read that spans geographical distance even as it explores the tension between science and altered states...Kitsakos threads a labyrinth of questions and embraces the greatest mystery of all: what connects us to our ancestors, ourselves and each other.”

“My work in theatre and opera introduced me to a number of sacred texts in both the Western and Eastern traditions which were important to understand as background material for projects,” says author Kitsakos. “In particular, the sublime poetry of Paramahansa Yogananda and a passage in John’s Gospel brought into focus for me a story I had been percolating for a while. My protagonist, a strong Jewish heroine, took me on one path and then abruptly brought me somewhere else.”

The book will be available in print and eBook from all online retailers as well as indie bookstores across the country. Kitsakos will be hosting book signings and discussions in several states. To keep up with where he will be, please check out his website at www.stephenkitsakos.com