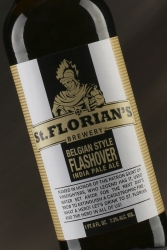 Windsor, CA, February 04, 2015 --(PR.com)-- The St. Florian’s Brewery family celebrates their second anniversary with the official release of their Belgian Style Flashover IPA at their Tap Station in Windsor on Saturday, February 7th from 12–8 pm. In addition to the beer launch, there will be local food vendors and live music by Arizona & the Volunteers from 3-6 pm. Growlers and brewery merchandise will be available for sale. St. Florian’s Brewery Tap Station is located at 7704A Bell Road in Windsor, California, within walking distance of nearby neighborhoods and Windsor Soccer Fields. This newest beer in the St. Florian’s Brewery line-up will be poured for the first time at the San Francisco Beer Week Opening Gala on Friday, February 6th.

St. Florian’s Brewery co-owners Amy and Aron Levin are exhilarated by the response to their beers as they reflect on the second anniversary of their business. “The demand for our beers exceeded our expectations,” said Amy Levin, CEO. “We are grateful for the reception to not only our unlimited release beers, but that our fans really appreciate our limited release and barrel-aged beers. Along with our new release, we are launching a long-awaited growler program so our supporters can share brews straight from the source with friends and family. We have a lot more surprises up our sleeves in the upcoming months.”

St. Florian’s Brewery is currently expanding production, by adding fermentation capacity & increasing efficiencies to speed up processes, such as new equipment in their bottling facilities. “We have just completed installation of another set of 30-Barrel tanks and installation of a new bottling line so that we can better meet demand for our beers, and add more styles of beer to our line-up,” Mrs. Levin explained. “We also have a set of 60-Barrel tanks on their way from Europe, so I look forward to what we will be releasing on our third anniversary next year.”

About St. Florian’s Brewery:
Named in honor of the patron saint of firefighters, who, as legend has it, used water set aside for the next day's brew to extinguish a catastrophic fire. St. Florian's Brewery was founded in Windsor, Sonoma County, California, and opened in February 2013 by husband and wife business partners, Aron and Amy Levin. The Brewmaster/COO of St. Florian's Brewery, Aron Levin, who has been brewing beer for 20 years, is a full-time Fire Captain. Amy Levin, St. Florian’s Brewery CEO, combines a wealth of sales and marketing experience honed over ten years as a Silicon Valley high tech sales and marketing manager with her personal passion for craft beer and exceptional customer service.

St. Florian's Brewery donates a minimum of 5% of profits to fire-related and other community-based organizations. Learn more at http://www.stfloriansbrewery.com.

Visit the website at http://www.stfloriansbrewery.com for a current list of restaurants, bars, and retailers serving St. Florian’s Brewery beers.

Let’s drink to the hero in all of us!

The St. Florian’s Brewery family celebrates their second anniversary with the official release of their Belgian Style Flashover IPA at their Tap Station in Windsor on Saturday, February 7th from 12–8 pm.