New imprint EMP Publishing marks its debut alongside author Jennifer Word's novel, "The Society-Book One: Genesis." Jennifer Word launched her career two-fold this week with EMP and her science fiction adventure trilogy. Featuring superheroes, aliens, an evil government secret facility, an intergalactic war, and a cosmic mystery, there's no other series like it. When asked to describe her trilogy, Word said, "It's utterly unique and compelling entertainment." 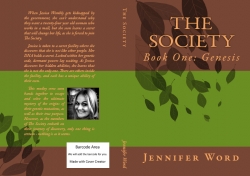 Los Angeles, CA, February 19, 2015 --(PR.com)-- Indie author Jennifer Word has a story to tell. She's been published before. An award winning poet, Word's short fiction has appeared in multiple magazines and anthologies. Her debut e-Novella, "RAIN," was released by Dark Moon Books in 2012. She even signed a publishing contract in 2012 with Stony Meadow, the imprint that originally released the first two books in her debut science fiction trilogy series, "The Society." The small imprint, however, failed to thrive, and her novels received no publicity. Word then started her search for a new home; and a new plan for her landmark trilogy that she describes as "the most unique science fiction series out there. It has something for everyone. You don't have to be a scifi lover to like it. It has Superheroes, compelling action, romance, tragedy, and a surprisingly spiritual undertone that lifts and inspires. It's a multi-genre series, but it all works and blends together into this amazingly unique saga that sucks you in." So what compelled Ms. Word to take the leap into becoming a Publisher? She explained, "My readership and fan base was as limited as my past exposure, but I had to find a way to complete the series for them, because I had fans asking me when the final book was coming out, because they couldn't wait!" She went on to explain that she had no other choice, since it became virtually impossible to find a publisher willing to pick her up in the middle of a series. Jennifer Word realized she needed to take her career fully into her own hands after her experience with a small press, so she founded EMP Publishing as the new imprint home for The Society series. "I realized the only way to get it done right was to do it myself," she said. "Now I'm a published author and I run my own publishing company!" Perhaps this talented author will finally get the exposure and the readership she's been missing. Her author page has links to all her currently available books, as well as upcoming projects. Amazingly prolific, Word has five new novels coming in 2015, and EMP is projected to grow exponentially along with her body of work, as she aims to help other talented but overlooked authors empower themselves along with her. EMP can be found online www.emppublishing.com and Ms. Word's author page can be found at www.jenniferwordauthor.com When asked about the future of her Society series, Ms. Word was blunt. "Too many fans have told me they're waiting for the movies from my books." Readers and Hollywood take note. Jennifer Word is an author to keep your eye on.
Contact
EMP Publishing
Jennifer Word
805-907-2933
www.emppublishing.com
jennifer.word@yahoo.com 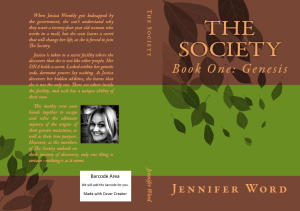 The Society Book One: Genesis