Dialtone Pickups allow guitarists to find that sweet spot, lock it in. 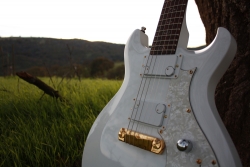 Livermore, CA, February 19, 2015 --(PR.com)-- Dialtone Pickups officially was founded in January 2014 by John Liptac and Tory Taylor. In an effort to achieve the "perfect tone," Liptac had made several modifications to his guitars, but he was unable to achieve the tone for which he was seeking. Instead of continuing to waste time and money on gear, Liptac found a better solution: Invent an adjustable pickup instead of settling for a less-than-excellent sound.

Using his passion for guitars combined with backgrounds in physics and engineering, Liptac spent 2011 through 2013 perfecting the design for the first prototype, which was built in January 2014. In August 2014, Dialtone Pickups assembled and installed its first set of production pickups. In September 2014, the company began pilot testing, and it launched a Traveling Guitar campaign, allowing bands to try out the pickups.

Dialtone Pickups' patent-pending technology provides the guitar industry's first continuously adjustable-tone pickup, which currently is offered as a solderless drop-in humbucker replacement. Dialtone Pickups are constructed with premium materials and components, including aluminum cases, which are more costly but offer superior functionality as compared to plastic cases, which commonly are used in the guitar pickup industry. Dialtone Pickups also offer gain control, giving players ultimate flexibility at their fingertips. Players can choose to set gain to a pre-determined level at the pickup or adjust gain on the fly through a knob on the body of the guitar. Dialtone Pickups’ wiring kit includes all components needed for either option.

Dialtone Pickups are active, allowing players to alter the tone of their guitar by using two knobs that directly are built into the pickup. These knobs can be adjusted independently to correct a problematic tone or achieve the preferred sound, and they easily are tuned in seconds to produce a new tone.

Pickups generally can be characterized by a resonant frequency and Q value. With typical pickups found in most guitars, these values are fixed by the passive electromagnetic design. Parameters, such as the number of turns of wire, capacitance and magnet type, among others, contribute to the sound produced. Dialtone Pickups use an active circuit that gives independent control of the frequency and Q value. Control over these parameters, coupled with an optional gain control, gives artists tremendous creative possibilities.

“In some ways, it would have been easier to make this a digital solution. Fitting two knobs in such a small space was no easy task. We evaluated a number of options, including interfaces that connect digitally to a smartphone, for example. But in the end, we settled on two simple knobs, because that’s what seemed most natural and intuitive. Easy access to tone: That’s our goal,” Liptac said.

The idea is to give musicians more flexibility with their sound and capability in performance as simply as possible. Dialtone Pickups work by integrating knobs into the pickup, itself, letting the player dynamically tailor the instrument's frequency response. These knobs are located at the hands of the player, giving new sonic possibilities during performances and recording.

“It’s sort of like going from a one-geared to a multi-geared bicycle. It’s just logical. We aren’t reinventing the guitar; we’re just making an important component more efficient and versatile,” Taylor said.

Designed by a physicist and engineer, each Dialtone Pickup proudly is made in the United States, using premium processes, materials and components. Coils are hand-wound, and pickups are carefully hand-assembled and tested by the Dialtone team in Livermore, Calif.