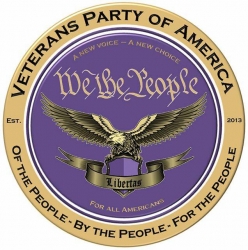 Moses Lake, WA, August 14, 2015 --(PR.com)-- The formal announcement of the inaugural Presidential candidates for the Veterans Party of America will be made on August 15 2015, at 7:30 p.m. MST, in the shadow of Mt. Rushmore, with Party members in attendance.

The candidate and running mate were chosen from a wide field of potential candidates that were vetted by the Party’s search and executive committees, after which a caucus was held, with each State Party casting a vote for the candidate of their choice. After the announcement each State’s Veterans Party team will work to get the nominated candidate on the ballot.

The Party’s National Vice Chairman, George Westrup, said: “We’ve had some very exciting things happen for us this year. The Veterans Party of America is the fastest-growing third Party in the country! We’re doing things in months that other third Parties have taken years to accomplish. We placed our first candidate into office last year and continue to attract new members daily. The announcement of our inaugural Presidential candidates is the highlight of our year.”

About the Veterans Party of America (VPA)
The VPA was founded in 2013 by several former military members who wanted to counter the budget cuts being proposed by Congress. Our mission is to place solution-oriented leaders into political office, to uphold the Constitution. We believe in liberty, justice and freedom.

Our Party Platform was developed with input from our members, based on the belief that there is a Constitutional, viable, fiscally-responsible solution for the problems our nation faces.

We welcome all veterans, their family, friends and supporters to join the Veterans Party of America. The VPA has active teams in all 50 States. For more information about the VPA, please visit: www.veteranspartyofamerica.org.