From Film School to the Red Carpet at DFANYC 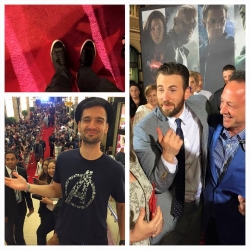 Mister Kacerle wrote to DFA director, Patrick DiRenna, stating, “I have to say Thank You! I was a student of 3D Maya course at DFA in 2009! I came to NYC from Eastern Europe with no English, no 3D skills, no experience...and guess what I'm doing today? I'm a film lighting technical director in the biggest VFX company in the world - LucasFilm/Disney!” Another remarkable alumnus, Linda Aïnouche, directed a new documentary entitled "Dreadlocks Story" that has been chosen as an official selection for the 2015 Trinidad & Tobago Film Festival. According to the festival's website, "the film features revealing interviews with historian Verene Shepherd, David Hinds of the reggae band Steel Pulse, and Monty and Blade Howell, sons of Leonard ‘Gong’ Howell (‘the first rasta’).”

Digital Film Academy, also known in the industry as DFA, is a New York state-licensed school that specializes in Digital Filmmaking and Media education. By offering hands-on filmmaking instructions taught by experienced industry professionals in a progressive, challenging and supportive small class environment, with unlimited lab time and a Membership to the facility upon graduation, DFA provides the students with the creative learning environment needed to become a truly experienced filmmaker.