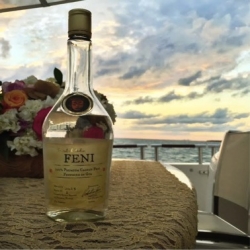 Chicago, IL, November 05, 2015 --(PR.com)-- The Spirit of India “Feni” announced today a partnership with Wirtz Beverage Illinois that will introduce the award-winning craft distilled Feni to the United States for the first time.

“We are truly thrilled to partner with such a tremendous team at Wirtz Beverage,” said B.J. McCaslin, Co-Founder of Sprits of India Feni. “This fulfills a life time goal of ours to introduce Feni to the U.S.”

“Spirit of India Feni is a unique, game-changing spirit that will enhance the creativity of mixologists while expanding the palates of new customers and consumers alike,” said Jason Griffin, Business Development Manager of WirtzCraft Spirits.

Made from handpicked Cashew Fruit, Feni can only be produced in Goa, India three months out of the year due to an extreme perishable window of only four hours once harvested. Handcrafted in small batches Feni has smooth entry and clean finish with hints of pineapple, citrus and cashew apple. Feni is to India just as Tequila is to Mexico and Champagne is to France.

In July 2015, Feni received a 94 rating by Taste Panel Magazine, 88 Point by Wine Enthusiast, and a Silver medal at the Annual International SIP Awards. Feni can be purchased at Chicagoland Binnys, Marianos, and Whole Foods Markets
www.FeniDrink.com

About Wirtz Beverage
Wirtz Beverage Illinois is a statewide leader in the distribution of fine wine, spirits and beer brands. The company combines its time-honored tradition of execution excellence with a reputation for best-in-class service and brand building throughout Illinois. The company is a member of Wirtz Beverage Group, a leading international wholesaler and broker with operations in Illinois, Minnesota, Nevada, Wisconsin and throughout Canada. To learn more, visit www.WirtzBev.com or engage with us on Facebook or Twitter.

About Spirit of India Feni
“The Spirit of India Feni” is headquartered in Coral Gables, Florida with primary operations in Chicago, Illinois. The Spirit of India Feni has handcrafted the most consistent cashew fruit distillation resulting in multiple awards and recognition for the best quality Feni ever produced worldwide. Feni is the heritage spirit of India Geographically Indexed to solely be produced for export out of the internationally ranked top 10 places to visit Goa, India. Feni has been distilled in Goa India for over 400 years as a Portuguese tradition with no electricity used in the process.