“Twelve – My Age of Reason,” a new, humorous, coming of age book based on actual events is released. In a comical eight-day period in 1964, 12-year-old Tommy Stohlgren turns from a sweet Catholic school kid to a skeptical smart-ass. He finally notices girls, and gets tossed from religion class for claiming, “If God is all-loving and all-merciful, there could be no Hell!" Needless to say, the nuns were not pleased. 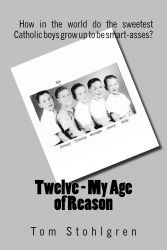 Windsor, CO, December 23, 2015 --(PR.com)-- Growing up should be this much fun! Join Tommy Stohlgren, his four irreverent brothers and friends in an old neighborhood in Oakland, California for eight days in 1964. “It’s a story based on actual events,” Stohlgren said, “as well as I can remember them fifty years later. My brothers and friends think it was a comically accurate re-telling, and that matters most to me.”

Stohlgren’s autobiographical gem traces his transition from a sweet Catholic school kid to a skeptical smart-ass. We laugh along side him as he finally notices girls, and gets tossed from religion class. After an hour-long lecture that “God is All-loving and All-merciful” from “Sister Mary-something (the names have been changed to protect the innocent), young Tommy reaches a logical conclusion, “If God is all-loving and all-merciful, there could be no Hell!" Needless to say, the nuns at St. Theresa’s Catholic School are not pleased. Then, Stohlgren begins to question everything about his faith-based upbringing. He stumps a young priest in confession, and botches his first and only Mass as an altar boy. With a lot of help and sketchy philosophical advice from his wild brothers, with whom he shares one bedroom, Tommy fully develops a strong conflict with authority, abandons his ancestral religion, and becomes an evidence-based learner, and later, a scientist – laughing all the way!

Today, Dr. Stohlgren, a globally renowned scientist at Colorado State University in Fort Collins, Colorado, teaches ecology and critical thinking. Although Stohlgren has worn Hawaiian shirts every day for thirty years, he approaches the topic of critical thinking with some seriousness. “It’s amazing to me how many teens and adults believe in ghosts, Bigfoot, ESP, UFOs, the Devil, and other mythical beings, for which there is no evidence,” Stohlgren says. “I follow the advice of comedian George Carlin (1937- 2008), who said, “Don’t just teach your children to read…Teach them to question what they read. Teach them to question everything.”

However, it’s the humor in the book that steals the show. The scenes with five uncontrollable boys in the cramped bedroom, around a tiny kitchen table, and the same Catholic school are uproariously funny. Different shenanigans in the book are compassionate, caring, awkward, disgusting, and illegal – a true coming of age story!

Stohlgren laughs, “Despite the book being available for several hours now, there has been no official response from the Vatican!” The Kindle version of the book can be ordered for $1.99. The screenplay is also available.
Contact
Tom Stohlgren, Author
Thomas Stohlgren
970-217-4498
www.TomStohlgren.com