Marcus Luttrell, the Lone Survivor collaborates with Article 15 and Ranger Up Clothing to host an evening of Military Heroes and the Trailer Premier of action Movie “Range 15.” 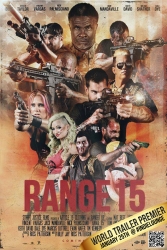 Park City, UT, December 29, 2015 --(PR.com)-- The Sundance Film Festival, a mecca of Movie Events, Gifting Suites, and Private Parties can now add Military Honors to its growing list of Celebrity Guests and Film Premiers. Event Producers Melissa Jensen and Kim Christopherson have infused the magic of Hollywood with the presence of Military strength by hosting the world premier Trailer of “Range 15” January 25th, 2016 during the Sundance Film Festival.

“Range 15” has more Top Secrecy than a Hillary Clinton email server, and yet it has brought together the combined talents of Hollywood greats like William Shatner, Sean Austin, Danny Trejo, Keith David, Randy Couture, retired Navy Seal and war hero Marcus Luttrell as well as a multitude of YouTube Celebrities including Mat Best with other Stars in an action packed comedy that will be sure to have you singing “God Bless America” in a 4-part harmony before the trailer has come to an end!

“Range 15” broke IndieGoGo records this year when it became the 4th highest funded film project on the popular crowdfunding site. The Veteran owned and operated companies Article 15 and Ranger Up have teamed up with YouTube channel MBest11x to turn this Veterans project into a reality. “Range 15” has once again proven that the humor of our Military Veterans teamed with the awesomeness of Hollywood can actually save the world!

“We are giving a voice to our Military Heroes, while standing up to defend the defining principles this country was founded on,” Producer Melissa Jensen said. “Although we have been producing events for years, this project is very close to our hearts.”

“Range 15” Director Ross Patterson, Writers Nick Palmisciano and Billy Jay, Team Members Jarred Taylor and Marcus Luttrell (The Lone Survivor), will be on hand for an exclusive Q & A Monday January 25th at the #IndieLounge 710 Main Street, Park City Utah during the Sundance Film Festival. “We are excited to showcase Range 15, the impact these Veterans have made, and honoring all those who have served our country,” Producer Kim Christopherson said.