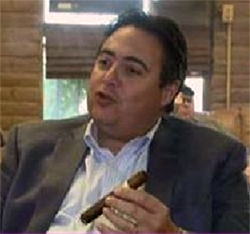 Rafael Nodal is the man behind some of the highest rated cigars by worldwide industry publications. Under the umbrella of Boutique Blends Cigars, he produces Aging Room, Swag, La Bohéme and Oliveros Cigars.

In 2013, Nodal’s Aging Room Quattro Concerto received the No.2 cigar by Cigar Aficionado behind the famous Cuban Montecristo No.2.

In 2015, his new brand La Bohéme was rank No.12 by Cigar Aficionado Magazine and is the first cigar brand in history to be ranked in the Top 20 Cigars of all Cigar Magazines the same year.

Rafael was born in Ciego the Avila, Cuba and came to the United States of America during the infamous Mariel boat lift in 1980. As a trained classical musician, he studied in New York City and later in Miami where he now calls home.

Rafael was previously a health care executive but his love for the Cuban culture made him start in cigars, which is the most recognizable Cuban cultural icon.

As part of his New York visit, he will participate in Marvin Shanken’s 22nd annual “Night to Remember Dinner” which raises money for the Prostate Cancer Foundation, a medical foundation that is seeking a cure for prostate cancer. On Wednesday, April 6, 2016 Rafael will be presenting 2 of his new cigars at the iconic Nat Sherman Townhouse on 42th Street in NYC. On Thursday, April 7, 2016 he will host a promotional event at RD’s Smokers Delight in Union City, NJ and on Friday, December 10 he will be at Art Toll’s Cigar Store in Horsham, PA.

As the United States continues to improve relations with Cuba and after the historic visit of President Obama to La Habana, Cuba, one of the main topics of conversation has been cigars. However, impending FDA regulations may make it harder to sell cigars in the USA.

Rafael Nodal has been an advocate of the premium cigar industry and defending the rights of adult Americans to enjoy cigars. In the article published by the Sacramento Bee newspaper last week and on the Sacramento ABC Channel 10 news segment, Rafael called the smoke shops in America “Laboratories of Democracy” and when referring to the current state of USA-Cuban relations he said “Most problems in the world could be fixed if the world leaders can sit in a room with a cigar.”