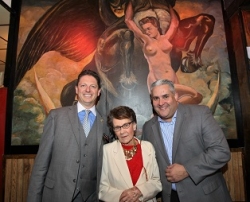 Milwaukee, WI, May 13, 2016 --(PR.com)-- On Monday, May 9, 2016, Milwaukee's iconic Five O'Clock Steakhouse celebrated their 70th Anniversary and being voted "Best Steak" by four major Milwaukee publications in the past year, with an exclusive V.I.P. event held at the restaurant.

Five O'Clock unveiled a historic mural discovered hidden behind the mirrored walls. Mata and Tony Kartsonas of Historic Surfaces LLC worked to restore the mural to its original condition, and were on-hand to speak to guests about the project.

Longtime customer Jeanne Ricci and her daughter Jackie Bayer were honored guests of the night. Ricci's wedding photographs from 1945 inspired not only the 70th Anniversary celebration, but also the search for the fabled mural.

Customer Jason Dodge donated photos from the time his family owned the property between 1917 - 1925. Five O'Clock's owners had enlargements created for the anniversary event and the photos will remain on display in the restaurant.

Donations collected at the event benefited the Milwaukee County Historical Society, who was instrumental in helping research the history of the restaurant in preparation for the anniversary. Ben Barbera, Associate Curator of the historical society spoke to the crowd.

Ron Faiola, author of "Wisconsin Supper Clubs: Another Round" signed copies of his newly-released book, in which Five O'Clock Steakhouse and Managing Partner Stelio Kalkounos are featured.

"We were incredibly honored to have loyal customers, community leaders, newsmakers and our fellow industry professionals come out to help us celebrate," said Stelio Kalkounos, Managing Partner of Five O'Clock Steakhouse. "Five O'Clock is the oldest remaining authentic supper club in Milwaukee. These walls are steeped in history, and the family is committed to upholding the finest quality and service for future generations to create their own memories."