World of Froud and Big Ben Parliament Creations (BBP Creations) have announced the re-release of their two popular apps, “Faces of Faerie” and “Pathways to Faery” to be available for Android devices on Google Play. 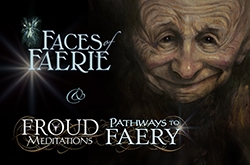 Reno, NV, June 24, 2016 --(PR.com)-- World of Froud and Big Ben Parliament Creations (BBP Creations) have announced the re-release of their two popular apps, “Faces of Faerie” and “Pathways to Faery” to be available for Android devices on Google Play.

Fans of the Frouds will now be able to experience what iOS users have enjoyed since 2011. In the app, Faces of Faerie, Brian Froud has created a portal that brings a touch of Faerie to everyone interested in connecting to another world via their mobile devices. Users can take a photo of themselves or simply touch the screen to form a connection to the realm of faerie and a faery will reveal itself and a personal message.

World of Froud, a UK company is run by Brian and Wendy Froud, two of the most well-known and respected artists working in the genre of faerie today. In the app Pathways to Faery, Wendy has written meditations based on those used in her workshops. These guided meditations take the listener on four journeys to the Otherworld and into the realms of Trolls, Faeries, Elves and Wise Ones. The original music composed by UK harpist Elizabeth-Jane Baldry allows the user to fully engage while exploring these enchanted realms.

The expansion of the originally created iOS apps to Android took over ten months to migrate to all of the various versions of its platform. A challenging aspect of creating or migrating apps to Android is the difficulty in coding for so many devices, sizes, differences in aspect ratios, and the various levels of operating systems within Android. For a small company, it is a labor of love to take on the challenge for their users.

The Froud’s partners, BBP Creations, began the arduous task of migrating both apps over to Android in September 2015. Even though the apps had been previously developed for iOS, it is not as simple as one would think to convert them over to Android. Where the iOS platform has at most 11-12 devices to cover for app creation, the Android platform has more than 18,000 devices as of 2016.

The Frouds are recognized worldwide for their artwork, books, and the films Dark Crystal and Labyrinth. Brian is considered the pre-eminent fairy artist of our generation, while Wendy’s mixed media models have been exhibited in museums and galleries throughout the U.K., Europe, Japan, and the U.S.A.

For the last five years, BBP Creations has developed in-house applications for the iPhone, iPad, Android, and thumb drives for large corporations. They are known for their quality apps, creativity and thorough testing to create flawless applications.