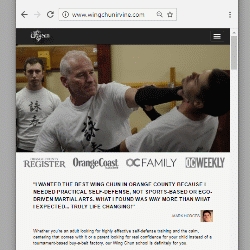 The site targets Orange County residents in Irvine, Lake Forest and Foothill Ranch and surrounding communities in order to help them understand Wing Chun’s self-defense effectiveness compared to more widespread martial arts. Those considering Wing Chun in Orange County will have a resource for the features and benefits of Wing Chun as well as exclusive information on the school’s programs and classes.

“Wing Chun, if trained correctly, is one of the world’s most efficient forms of hand-to-hand self-defense,” continued Williss. “We teach that your best response to an attack is a quick, decisive counterattack. Backed with simple, real-world knowledge, people of all sizes, shapes and ages have the power to become a legitimate human weapon.”

Wing Chun is known for its effectiveness in the close-quarter ranges proven to be the most prevalent in a realistic fight. In fact, Wing Chun is the chosen system trusted by some of today’s most highly respected self-defense experts.

The Dragon Institute was voted Orange County’s #1 martial art three out of the last four years by CityVoter’s annual OC Hotlist. It also has been recognized as one the top Wing Chun schools in the nation.

Peter Chang of Irvine described in his online review that he considered The Dragon Institute to be "one of the top Wing Chun schools in the country… 'a true representation of high quality Wing Chun.'"

"I drive all the way from Pasadena to train here," said Ben Hugesson. "Depending on traffic, the travel time is about an hour and a half. The way I look at it, if I'm going to spend my time training, I want it to be the best training I can get. Not just somewhere that's close."

Founded in 2010 in Dana Point, CA, The Dragon Institute’s Irvine school opened this year as demand grew for its no-nonsense Wing Chun classes. The school teaches the art that was passed down by Grandmaster Yip Man (aka Ip Man) and made famous by his student Bruce Lee. The school is led by Sifu Derrick Mansell, 7th generation lineage holder under Yip Man’s senior-most student, Leung Sheung. 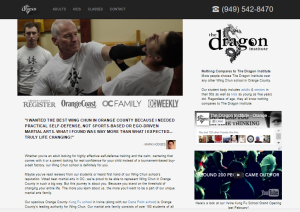