Elliott Homes adds to their long list of honors and accolades after receiving two highly coveted awards in one week for their custom beach front home, The Camille. The 4 bedroom, 3.5 bath home brings the antebellum style homes back to the Mississippi Gulf Coast that have been missing from the landscape since Hurricane Katrina. 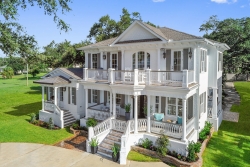 Elliott Homes LLC has received the 2017 Silver Award honors for Best Architectural Design Detached 3,501 to 4,000 square feet. The Nationals salutes and honors the best in the building industry for their determination, integrity, creativity and endurance. In addition to this award, The Camille has also won the Grand Award from the Home Builders Association of Mississippi, the highest honor in the state.

The Camille was designed to bring back the antebellum style homes that graced the MS Gulf Coast before Hurricane Katrina. The painted brick exterior with ornate shutters and more than 1,100 square feet of porches take advantage of the ocean views. The most utilized rooms are located at the front of the home. On the first floor is a gourmet kitchen, master suite, spacious great room, nursery and home office. “One of the highlights of the kitchen are the barrel shaped doors,” states Brandon Elliott, President. “These doors were a challenge for our team as they took over 3 months to design, build and install,” he adds.

Intricate moldings and window casings carry throughout the entire home. The second floor has three additional bedrooms and a family room that leads onto another balcony giving all access to the sights and sounds of the Gulf of Mexico.

Silver Award Winners are the top vote recipients in each category and are the finalists for the Gold Award. Gold Awards in each category will be presented as part of the International Builders' Show, the awards ceremony on January 10th at Hyatt Regency Orlando and is expected to draw more than 1,000 attendees.

"The Nationals are the most prestigious awards of their kind, setting the benchmark for innovations in new home design, marketing and sales, "said Meredith Oliver, chairperson of the Nationals. "NAHB's commitment to recognizing originality, imagination and success has been exemplified by its award winners since the competition's inception."

Started in 1982 as the Institute of Residential Marketing, The Nationals award program continues to recognize superior new home sales and marketing achievements. With 57 categories across various disciplines of the new home industry, the awards honor excellence in product and community design, advertising, marketing and sales achievements by individuals and sales teams.

During a three-day judging process, a panel of 7 industry professionals from across the country determined the Silver and Gold award winners from a field of over 1,100 entries.