A puppet comedy about the destruction of a dictator-controlled news show during the Arab Spring revolution movement. It's definitely one-of-a-kind and relevant to the current political turmoil in America. 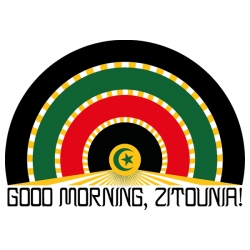 Called a "surprisingly informative puppet show" by Time Out New York Magazine, Good Morning, Zitounia! depicts the Arab Spring revolutions from the point of view of a heavily censored T.V. news broadcast. The reporters and correspondents, all played by puppets, scramble to present the usual spate of propaganda on the last day of broadcast before the revolution forces the resignation of the corrupt dictator. The show takes place in Zitounia, a fictional island-nation in the Mediterranean, and is based on real events in Tunisia and Egypt in 2011.

"We consider things like free speech, peace, and democracy to be American values, so in addition to being funny I hope this story of the struggle for freedom in the Arab world will serve as a reminder that these are human values, and not uniquely American. Our political climate is so demonizing of Arabs and Muslims, so anything that can serve as a reminder of our common humanity is very relevant. I also hope the parallels between dictatorship and the current American political climate can inspire us to continue to fight to maintain these values rather than take them for granted," said writer/performer Ben-Abdallah, who performs weekly on an improv house team at The People's Improv Theater, where she also debuted, How Did I Get in Here? The Beverly Blondell Story, her previous solo-play which went on to the NY International Fringe Festival in 2014. Ben-Abdallah is of half-Tunisian descent and wrote the script on a recent trip to Tunisia where she interviewed relatives and friends who participated in the 2011 popular uprisings.