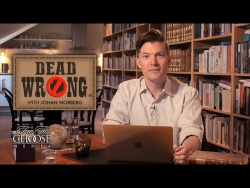 “Johan’s studies in intellectual history bring often overlooked perspectives to the subjects of our documentaries,” said Bob Chitester, founder and CEO of Free To Choose Network. “He has a gift for summarizing complex concepts and he is an excellent storyteller, thus making the subjects of our productions accessible to the average television viewer.”

Described as “a glamorous young pro-capitalist” by Washington Post, Norberg is the author and editor of more than 15 books, including Progress: Ten Reasons to Look Forward to the Future, named by the Economist as one of the best books of 2016; Financial Fiasco: How America’s Infatuation with Homeownership and Easy Money Created the Economic Crisis, which inspired an internationally acclaimed documentary; and In Defense of Global Capitalism, originally published in Swedish in 2001 and since published in more than twenty countries.

In addition to his work with Free To Choose, Norberg pens a weekly column in Metro, Sweden’s leading newspaper, and his articles and op-eds are featured regularly in many of the world’s most influential news outlets, including The Wall Street Journal, The Huffington Post, National Interest, Forbes, and The Spectator.

About Free To Choose Media
Based in Erie, PA, Free to Choose Media produces thought-provoking, award-winning, public television programs and series, offering diverse voices, powerful stories and a fresh perspective on a range of important global and national issues. For more than 30 years, the Free To Choose production teams have traveled the world to explore topics such as the economic roots of the Arab Spring and the inspiring stories of entrepreneurs raising themselves and their communities out of poverty, as well as revealing how innovation and new technologies may be the answer to the world’s growing energy needs. For more information, visit the website, at www.FreeToChooseMedia.org.
Contact
Hawkins PR
Marjory Hawkins
512-838-6324
www.freetochoosemedia.org