Mike Smith Rides Arrogate and the American Equus Thoroughbred Racing Irons to the Win in the $10 Million Dubai World Cup. 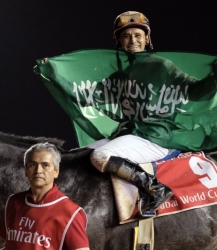 Gilbert, AZ, March 31, 2017 --(PR.com)-- American Equus racing irons helped Hall of Fame Jockey, Mike Smith, pilot Arrogate to a stunning, come-from-behind, victory in the 2017 Dubai World Cup. After a harrowing break from the gate, Smith recovered and ran an unbelievable race to win the second richest purse in thoroughbred racing. Smith and Arrogate conquered a field of thirteen horses and ultimately collected $10 million dollars. American Equus, was thrilled to be along for the exciting ride after working so closely with Smith to create stirrups that would provide a safe and secure foot bed to jockeys when circumstances were treacherous.

"I didn't think that anything could top the pride I felt after watching Mike and Arrogate win the Pegasus Invitational, but this did!" said David Shano, founder and president of American Equus. "Mike showcased what an incredible rider he is and our stirrups were there for him when he needed them most."

"They (American Equus) are incredible irons and they make me feel really confident and comfortable in the tack even when things don't go like I had planned," said Smith. "They are also so beautiful that a lot of the boys were asking me about them- which is cool when you are with jockey's from all over the world and they admire your equipment."

Inducted into the National Museum of Racing Hall of Fame in 2003, Mike Smith has been a top jockey in American horse racing since the 1990's. Smith has won all of the American Classic thoroughbred races and has more Breeder's Cup Championship wins to his name than any other jockey in the history of the sport. His most recent win in the Dubai World Cup and the Pegasus World Cup Invitation, solidifies his position as one of the most respected jockeys in the sport.

"The Dubai organizers pulled out all the stops and they really are second to none when it comes to entertainment," recalled Smith of the Dubai World Cup. "It was quite the night, tons of electricity in the air and the horses from tons of different countries - I feel so blessed and humbled to have been given the opportunity to put that race in my career before I retire."

With the breathtaking win of the first Dubai World Cup behind him, Smith is looking ahead to getting another crop of young horses ready to compete in the Kentucky Derby and Kentucky Oaks events.

"I have been out of the loop for a couple of weeks preparing to go to Dubai and then being there for a week but now it is time to think about something totally different and really important with the Kentucky Derby and Kentucky Oaks," said Smith. "I have a couple of great horses that have a lot of ability to I am looking forward to the next adventure."

American Equus, is proud to sponsor talented and professional athletes like Smith and is looking forward to many more successful races on his saddle.

To learn more about American Equus and their complete line of stirrups for all equestrian disciplines, please click here.