Novelist Dick Pirozzolo Presents a Copy of His "Escape from Saigon" to Gov. Michael Dukakis

On the 42nd anniversary of the end of the Vietnam War on April 30, Dick Pirozzolo presented a copy of his novel "Escape from Saigon" to former Massachusetts Gov. Michael Dukakis. This Vietnam War novel, coauthored with Michael Morris, is set in Saigon, South Vietnam, during April, 1975, the final month of the war. A historical fiction, the novel uses flashbacks, newspaper accounts and barroom conversations to provide historical context to America's first television war." 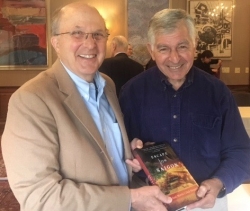 Cambridge, MA, April 27, 2017 --(PR.com)-- Boston author Dick Pirozzolo presented a copy of “Escape from Saigon - a Novel” to former Massachusetts Gov. Michael Dukakis following his recent talk at the Harvard Faculty Club as part of The Boston Global Forum symposium on trends in media to include segmentation and the emergence of fake news.

The novel by Pirozzolo and coauthor Michael Morris focuses largely on the correspondents who dedicated their youth to covering what was then America's longest war and underscores the enormous changes that have come to the media over the past four decades since the expression "America's first television war" was coined, says Pirozzolo.

While the action is set during the final month of the Vietnam War that ended on April 30, 1975, 42 years ago next week, flashbacks, newspaper accounts and barroom ramblings offer historical context.

Pirozzolo said, “Escape from Saigon is especially relevant today as Americans want to look back at that protracted war for perspective on our current foreign entanglements in Asia, and the Middle East. Indeed, the popularity of other literary works such as 'The Sympathizer by Viet Nguyen and the return of 'Miss Saigon' to Broadway are two indications of how Americans want to understand what was then America’s longest war.”

Today Vietnam is an important trading partner and a key ally in the Pacific, serving as a counterpoint to China’s impact on the region.

“Escape from Saigon” (Skyhorse Publishing, New York, January 2017, 264 pages) hews closely to historic events as it follows the lives of both ordinary and powerful people trapped in the besieged city once known as The Paris of the Orient.

Among them are NBS-TV’s first Vietnamese-American correspondent who chronicles the fateful events of April, the hard-hitting Sam Esposito of The Washington Legend who infuriated Richard Nixon, an American businessman who risked his life to smuggle out his employees; a French expatriate barkeep who is hanging on the last vestiges of colonialism, as well as the disillusioned Ambassador Graham Martin, CIA operatives, spies and double agents.

The coauthors are decorated Vietnam veterans, career journalists and writers with five nonfiction books to their credit.

Pirozzolo was awarded the Bronze Star for service as a US Air Force press officer in Saigon, often participating during the official daily press briefings aptly nicknamed, “The Five O’clock Follies.” Morris, a combat veteran, served in the U.S. Army in Vietnam in 1967-68 and was awarded the Purple Heart.

The novel has won praise from:

Winston Groom, author of Forrest Gump who wrote, “Escape from Saigon brings to life the lives of the men and women trapped in the capital city,” and

Casey Sherman, New York Times Bestselling Author of The Finest Hours, and Boston Strong who wrote, “Escape from Saigon is a sweeping saga…in the grand tradition of Michener and Clavell,”

Llewellyn King, executive producer and host of PBS-TV’s “White House Chronicle, put it this way: “Escape from Saigon has the same ring of authenticity as Graham Greene’s The Quiet American. Its portrait of city in extremis is chilling and completely engrossing.”