ARIDO Jewelry Honoring Adrianna Edwards for Her Contribution in the Music, Fashion and Film Industry 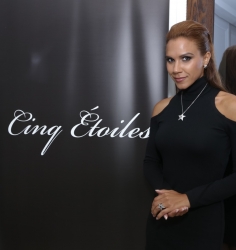 As a teenager, Adrianna was featuring her dance and acting skills in blockbuster movies with major stars such as Halle Berry “Catwoman” and Jason Presley “Who wants to marry Ryan banks?”

Her Music, Film and Modeling projects have created many opportunities that have taken her around the world.

In 2013 she produced and released an album called Cancun Nights with the single “One Last Time.”

In 2015 she launched her bespoke Jewelry line Cinq Ètoiles in New York with ARIDO Jewelry.

Shortly after returning to the UK she co-wrote and featured on Soulshaker track “What You Do To Me” which featured on the music week pop charts and ranked #1 on Kings of Spin. It was also released on various CD compilations along side Selena Gomes and Craig David.