Vegan Soulfest is a festival celebrating culture and vegan living. All Vegan. All Soul. 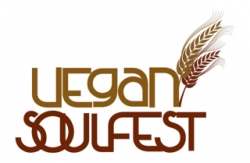 In 2014, Brenda Sanders, co-founder of Thrive Baltimore community resource center teamed up with Naijha Wright-Brown, co-owner of The Land of Kush, a vegetarian soul food restaurant in Baltimore City to organize the 1st Annual Vegan SoulFest. The purpose of the collaboration was to bring information about the benefits of eating healthier foods to Baltimore City, and do it on a larger scale. "I’ve attended a couple of vegan festivals in surrounding areas," Wright-Brown said. “We felt the need to bring a vegan soul festival of this kind to Baltimore’s inner city - making it accessible to people by car, train and bus."

The inaugural Vegan SoulFest turned out to be more successful than the founders imagined. The expectation was to attract a few hundred people to a free festival about food. Instead, more than 1,200 people attended, resulting in coverage by Dan Rodricks of The Baltimore Sun who described it as a “new food festival in Baltimore.” People came from all over Baltimore City and the surrounding counties – even as far away as Philadelphia, New York City and Northern Virginia – to learn more about the nutritional benefits of including more plant foods in their diets. They heard lectures from experts in plant nutrition and watched cooking demos on how to prepare plant-based foods from local vegan chefs. Best of all, they got to sample a variety of delicious vegan foods from dozens of vendors.

In 2015, Vegan SoulFest became more successful by entering into a preliminary partnership with Baltimore City Community College (BCCC). Nearly 100 vendors were present and 3,000 people attended – more than double the number from the first year. “We’ve been pleasantly surprised by the overwhelmingly positive response we’ve gotten,” Brenda commented. “I’m so honored to be a part of bringing this festival to the people of Baltimore!” With the help of major sponsors like Harbor Bank and A Well-Fed World, Vegan SoulFest was able to expand into the much larger venue of a college campus, bring in more nutrition experts, feature back-to-back cooking demonstrations, and incorporate fitness and live musical performances into the program.

“Vegan SoulFest has a perfect home at Baltimore City Community College,” said BCCC President/CEO Dr. Gordon F. May. “As a community gathering place where the vital benefits of healthy eating are made available to all during this festival, we want to empower everyone to take responsibility for their personal health.”

The annual "vegansoulicious" festival continues to grow year over year and may in need of a new home in 2018. 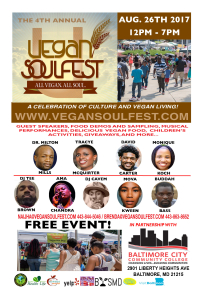