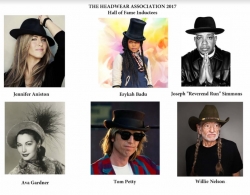 The Hall of Fame Inductees:

Tom Petty wore hats on stage for decades, but perhaps his most iconic look is his ubiquitous top hat. Petty ruled MTV with innovative videos including “You Got Lucky,” “Don’t Come Around Here No More,” “Into the Great Wide Open” and “You’re So Bad,” all of which featured custom Top Hats.

Willie Nelson is a country legend who has regularly paired cowboy hats with his signature braids for decades. A staple of the Outlaw Country genre, Nelson pairs his Stetson cowboy hats with a little edge, and a lot of attitude and style.

Joseph “Reverend Run” Simmons is Hip Hop Royalty. From leather fedoras and Kangols back in the day, to his current penchant for wide brim fedoras, RUN DMC founder, Reverend Run, always tops off his style with a hat.

Erykah Badu burst onto the music scene with “Baduizm” and her signature African Turban in 1997. Since then the legendary singer has made turbans and outrageous hats part of her signature style. The internet is awash with images of Badu in glorious headwear, and there are even YouTube tutorials about how to style a turban like Badu.

Jennifer Aniston is known for her understated, classic style. Hats have been a signature wardrobe staple for Aniston for many years, and she is often seen in jeans and a fedora.

Ava Gardner was one of Hollywood’s most glamourous screen sirens. The American Film Institute ranked Gardner as one of the Top 50 Screen Legends of all time, and her style was equally legendary. Her hats were exquisite and she was breathtaking in them. Fun Fact: Gardner was married to fellow Headwear Hall of Famer, Frank Sinatra.

For more on The Headwear Hall of Fame visit the THA website: http://theheadwearassociation.org

The Headwear Association is a 110-year old trade association, the oldest in the fashion industry.

Our birth was a chance meeting of traveling hat salesmen in 1907 who had just finished their seasonal selling trips in NYC. The first dinner was held at the Waldorf Astoria (then on 34th Street) on January 30, 1908 with 34 industry members present.

Our mission is to promote hats and the headwear industry throughout the world, and to foster goodwill and fellowship among those engaged in the headwear industry. The 110th annual THA Gala will be held at The Central Park Boathouse on April 28, 2018, and is open to anyone in the fashion and headwear industry.
Contact
The Headwear Association
Jill Hammer
917-207-5707
http://theheadwearassociation.org
jill@hammerink.com
https://www.instagram.com/theheadwearassociation/?hl=en
https://www.facebook.com/TheHeadwearAssociation/
https://twitter.com/thaheadwear?lang=en