OTTO NEUMANN: MODERN DEGENERATE at Rare Nest Gallery and State Street Gallery Through March 15th 2018. The Nazi's Labelled Him a "Degenerate" Artist But He Survived.

Otto Neumann’s (1895, Heidelberg - 1975, Munich) early work as an Expressionist painter and printmaker, evolved over 60 years. Neumann worked continuously even as he survived the Third Reich with his wife Hilde Rothschild, who was Jewish. Otto’s art was labeled “degenerate” by the Nazis (an automatic honorific). All of Neumann's work is imbued with a rare and strange intensity. In 2 major exhibitions, over 150 works / artifacts will be exhibited, complimented by receptions, lectures and events. 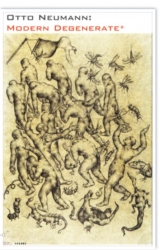 Reservations requested for all special events: keith@rarenestgallery.com or 708-616-8671

Otto Neumann’s (1895, Heidelberg - 1975, Munich) early work as an Expressionist painter and master printmaker, evolved over 60 years. Neumann worked continuously even as he survived the First World War and then the Third Reich in Germany with his wife Hilde Rothschild, who was Jewish. Neighbors protected the couple, though they suffered greatly. Otto’s art was labeled “degenerate”* by the Nazis (an automatic honorific). Neumann's work is imbued with a rare and strange intensity. In two major exhibitions, over 150 works and artifacts will be exhibited, complimented by receptions, lectures and access to rarely seen media.

Early in his career, Neumann took part in the vital intellectual life of Heidelberg and Munich. The artist enjoyed close associations with intellectual leaders including the philosopher Max Weber (1864 – 1920) and the groundbreaking psychiatrist and art historian Hans Prinzhorn (1866 – 1933) who’s collection and studies of art of the mentally ill may be considered the root of Art Brut and subsequently, a contemporary fascination with Outsider Art. These influences may be observed in Neumann’s work.

During the 1920’s and 1930’s Neumann undertook an intensive, educated yet highly personal interpretation of Dante’s Inferno. It is significant that the artist chose a subject of unredeemable punishment. A highlight of the State Street Gallery show will be a complete set of graphite drawings of all 34 Cantos from the Inferno.

Throughout his life, Neumann’s output was extraordinary and masterful. Yet, after the World Wars he eschewed exhibition or promotion. His archive is deep and profound, and the selected works will provide an extraordinary opportunity to understand a great modern artist.

State Street Gallery’s curator Shelley Lamantia on Neumann: "The lives of artists are often the most important element to take into consideration. Their emotional, psychological, and sometimes physical, state is the catalyst for their work. Their life experiences, struggles and celebrations, are what add depth to their work. The range of Otto's styles, media and subjects alone is intriguing. However, Neumann’s Grotesques are truly what drew me to his work. They make me wonder what he was experiencing, what he was thinking, what challenged him. The figures appear menacing, yet joyful and kind. He drew them with such care, as if he knew them personally."

“Degenerate”
Degenerate art (German: Entartete Kunst) was a term adopted by the Nazi regime in Germany to describe Modern art. This work was banned on the grounds that it was un-German, Jewish, or Communist in nature, and those identified as degenerate artists were subjected to sanctions. These included being dismissed from teaching positions, being forbidden to exhibit or to sell their art, and in some cases, being forbidden to produce art. The term “Degenerate” in this context became a badge of honor beyond the fascist context. Degenerate Art also was the title of an exhibition, held by the Nazis in Munich in 1937, consisting of modernist artworks chaotically hung and accompanied by text labels deriding the art. While modern styles of art were prohibited, the Nazis promoted paintings and sculptures that were traditional in manner and that exalted the "blood and soil" values of racial purity, militarism, and obedience. Similar restrictions were placed upon music. Films and plays were also censored.

Though family lore indicated that Neumann suffered under the Degenerate label, only recently was clear documentary evidence found - in the only surviving catalogue of Entartete Kunst, held in the collection of the Victoria and Albert Museum, London. Neumann’s work is listed at least three times, in public collections that saw extensive confiscation and destruction. In an act of supreme hypocrisy, members of the Nazi Party defied orders to destroy these works and hoarded the art – selling some for profit and keeping some for private appreciation.

Rare Nest Director Keith Bringe reflects, "I think there are clear parallels between Germany in the 1930’s and what is happening today. Conservative factions would like to do away with any sort of subsidy for arts and culture. Vitriolic discourse and lashing out at artists are occurring now and are endemic to extremist ideology."

Dr. Sokol, Professor Emeritus of Art History and Museum Studies, University of Illinois, has curated the Neumann collection for more than a decade. Sokol’s 275-page monograph “Otto Neumann” (2006, Prologue) is the definitive text on the artist. In a highly visual presentation, Dr. Sokol will explore the life and times of this modern master.

Between Insanity and Beauty: The Prinzhorn Collection - A Documentary Film by Christian Beetz, 2008. Location and times to be announced.

What is the link between psychological states and the creative process? Is there a relationship between psychosis and the artistic impulse? What can art works produced by mental patients tell us about artistic genius? BETWEEN MADNESS AND ART examines these issues through the story of Dr. Hans Prinzhorn (1886-1933), a German student of psychiatry and art history. As Director of the Heidelberg Psychiatric Clinic in the 1920s, he was fascinated by the beauty and expressiveness of the drawings, paintings and sculptures of his schizophrenic patients. By the time of his death had organized the largest collection of its type in the world.

Visit rarenestgallery.com for updates on additional events and exhibitions news.

Images of two exhibition locations, cover of Otto Neumann: His Life and Work