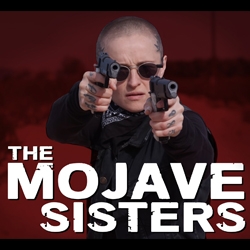 The Mojave Sisters follows Casper (Hershey) as she grieves the death of her sister and discovers the father she thought was dead, is still alive. This emotionally charged journey takes Casper on a ride of unexpected chaos. Without knowing who to trust, Casper uncovers secrets from the past and the father she’s never met.

“I've always wanted to direct a modern day western. I wrote 'The Mojave Brothers' as a feature film, but after meeting Lee Dawn Hershey, I knew she had to be the lead. I adapted the feature into 'The Mojave Sisters' series, exploring the life of a female assassin grieving the loss of her sister,” said Taylor King.

“We were casting our 2019 series SAM, when we originally met with Lee Dawn Hersey, and on the drive home, knew we had to have her play the title character in 'The Mojave Sisters',” said producer Sean King.

The Mojave Sisters is available on Prime Video to stream and Prime members can also download the series to mobile devices for offline viewing at no additional cost to their membership. The series will be available in the US and UK for Prime members to watch via the Prime Video app for popular smart TVs, Fire TV, Fire Tablets and Android and iOS phones and tablets. Customers who are not already Prime members can sign up for a free 30-day trial at amazon.com/prime. For a list of all Amazon Video compatible devices, visit www.amazon.com/howtostream.

Sean King was born in 1966 in Los Angeles, California, and was raised in Redondo Beach, California. When he was 19 he wrote directed and stared in the feature film "Highways," which was sold to HBO. In 1995, he opened "Imagery Digital, an early adopter of digital editing and sound design. In 2015 he formed New Zealand Son Films with his son, director Taylor King. New Zealand Son Films has produced, Private Sales (2016), Coffee with Ana (2017), The Mojave Sisters (2018), Lies (2018) and David & Nikki? (2018).