A Norway-born sports crowdfunding startup SPONSOR.ME has announced the launch of its A.I.-based Genius Wizard, the industry's first smart module that can write texts and suggest images for athletes' crowdfunding campaigns. 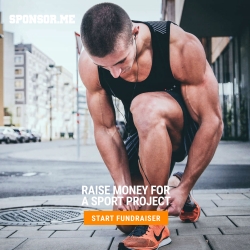 The sports crowdfunding industry has just received a serious kick in the butt by a new “kid” on the block.

A Norway-born crowdfunding startup SPONSOR.ME decided that the sports crowdfunding industry had fallen too far behind the technology giants like Google and Facebook and decided to bring something new to the table.

Today, the company with operations in 21 countries, 1 million users and only 4 full-time employees, introduced the Genius Wizard – the first A.I.-based crowdfunding module that can automatically create appealing stories for fundraising campaigns, attach relevant visuals to the page, and even write texts that make all your friends say “Take my money now.”

“We have seen that many athletes found it difficult to write texts for their fundraisers,” said Ola Akselberg, Founder and CEO of SPONSOR.ME. “Many would sign up on the platform, start writing and then just stop...Now, it takes a few clicks and mere seconds for the campaign to be 100% ready – text and pictures included. Athletes can then add a personal touch to it if they want to, but overall, after the Genius Wizard finishes its job, the fundraiser is ready to be shared on social media and receive donations.”

The SPONSOR.ME platform will also advise on how many times a fundraiser must be shared on Facebook to maximize the chances of receiving more donations.

The platform works more like a social media site for athletes, where sponsors’ contributions can also be branded, liked and shared on other platforms. This brings a lot of opportunities for companies that want to build relationships with athletes by sponsoring their endeavors.

SPONSOR.ME has already shaken the sports crowdfunding world before, when the company started to accept more payment options than any other platform in the industry.

“We worked hard on bringing the Genius Wizard to the athletes. We hope that now, athletes can focus on what they do better than anybody else – sports, and leave the tedious writing tasks to our platform,” said Akselberg.
Contact
SPONSOR.ME
Anzhelika Osmanova
+4796709013
https://sponsor.me