BentBeat’s New “Studio B” Showcases Portland as a Music City

Portland-based BentBeat Productions unveils their new “Studio B” hub as a welcoming place for Portland area artists to create audio recordings on par with the major studios and record labels. 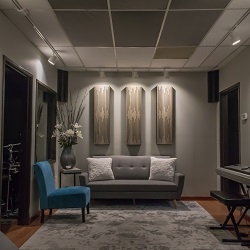 “Portland has been known for its thriving independent music scene for the better part of a decade,” Dave Beatty, co-founder of BentBeat, said. “Our goal was to help address the needs of local creators to write, record, and have internationally available, broadcast-quality material.”

Jozi Bently and Dave Beatty started BentBeat Productions in 2011 in a modest, single-room studio to create the soundtrack to the Portland-filmed independent movie “Country Girl.” Since then, they have worked with scores of musicians releasing a dozen albums and hundreds of singles. Located in North Wilsonville, BentBeat’s newest production hub can accommodate individual artists as well as full bands. “Our artists come from all over the Northwest, and we wanted to have a central location with easy access to Interstate 5 and nearby hotels,” explained Beatty.

“We have had the great opportunity to work with artists as far away as Josh Hoke in Indiana but also as close as Music Pastors like Chris Voigt in Keizer and Kate White in Vancouver,” said Bently. “We have been fortunate to work with such talented artists. It makes our job rather easy.”

“BentBeat’s success and that of our artists shows that despite reports of the music industry being in turmoil, the public is still eager to experience fresh and innovative music,” Bently continued. “With the recent passing of the Music Modernization Act in the house and senate, we see a new and exciting trend of professional artists and musicians being compensated.”

BentBeat is both currently accepting applications for their roster and continues ongoing work with bands and individuals on smaller projects. For more information or to make an appointment, email info@bentbeat.com or call 503.489.8275.