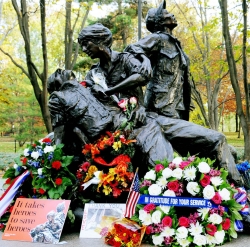 Washington, DC, October 26, 2018 --(PR.com)-- This Veteran’s Day weekend marks the 25th anniversary of the dedication of the Vietnam Women’s Memorial on the National Mall. To commemorate this milestone, a weekend of poignant events will honor the service and sacrifice of the 265,000 women veterans, military and civilian, who served during the Vietnam era.

Other noted speakers include Jim Knotts, president and CEO of the Vietnam Veterans Memorial Fund, Patricia Trap, acting superintendent of National Mall and Memorial Parks, and Vietnam veterans Allen Hoe, civilian aide to the secretary of the army, and Colonel A. Jane Carson, USA (Ret).

Anniversary events are open to the public and will be held on the grounds of the Vietnam Veteran’s Memorial on the National Mall; the candlelight and storytelling programs will take place at the Vietnam Women’s Memorial statue, 300 feet from the Wall.