Labeled a “venerable holiday tradition” by The Chicago Tribune, Apollo Chorus of Chicago’s annual presentation of Händel’s enduring masterpiece is not to be missed. 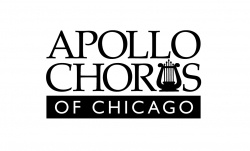 One of the most renowned musical organizations in the nation, The Apollo Chorus of Chicago, celebrates the 139th anniversary of its annual presentation of Händel’s Messiah with two performances on Saturday, December 15 at 7:00 p.m. and Sunday, December 16 at 2:00 p.m. at the Harris Theater for Music & Dance, 205 E. Randolph Dr., Chicago.

Hailed as a “venerable holiday tradition” performed with “an exultant spirit that came from the heart” by The Chicago Tribune, The Apollo Chorus' rendition of Händel’s Messiah has been performed every December since 1879—a track record unmatched by other choral organizations. This year, Apollo welcomes outstanding soloists Jamie-Rose Guarrine, soprano, Annie Rosen, mezzo-soprano, Josh Lovell, tenor, and Evan Boyer, bass-baritone. Presented at the iconic Harris Theater for Music & Dance, Apollo’s uncut presentation of Handel’s Messiah offers audiences the rare opportunity to experience the full power and passion of Messiah as they've never heard it before.

Soprano Jamie-Rose Guarrine is acclaimed for her vibrant vocal beauty, charming stage presence, and accomplished musicianship. Of her portrayal of Susanna in Le nozze di Figaro, Opera News described her as “a natural object of attraction for the men in the play,” her voice as “light, flexible and vibrant — well suited to the part of a scheming maid and romantic ingénue.” She has performed on the stages of Los Angeles Opera, Minnesota Opera, The Santa Fe Opera, Wolf Trap Opera, Opera Philadelphia, Chicago Opera Theater, Austin Opera, Utah Opera, Fort Worth Opera, the Madison Symphony, the Saint Paul Chamber Orchestra, the Santa Fe Chamber Music Festival, The National Symphony Orchestra of Costa Rica, San Antonio Symphony, the Santa Fe Symphony, among many others. Current and recent projects include the role of Fury in the world premiere performance of Julian Wachner’s Rev. 23 at the PROTOTYPE Festival and Beth Morrison Projects in NYC and Boston, her debuts with the in Boston and Trinity Wall Street in Handel’s Jephtha, joins Smith College for the Brahms Requiem, sings Handel’s Messiah with Augustana College, Duke Chapel Choir, and the Jacksonville Symphony, and returns to the Florentine Opera of Milwaukee singing the role of Pamina in Mozart’s Die Zauberflöte.

The New Haven, Connecticut native, a Ryan Opera Center alumna, mezzo-soprano Annie Rosen was heard this summer as the Stepmother/Philip Glass’s The Juniper Tree (Wolf Trap Opera), and earlier this season as Eve/Julian Wachner’s Rev 23 (White Snake Productions – world premiere) and as a soloist/Take Care of This House (New York Festival of Song). Prior to the Ryan Opera Center, the mezzo-soprano joined the Metropolitan Opera roster during the 2013/14 season (Die Frau ohne Schatten) before returning to the apprentice program of The Santa Fe Opera to cover Ni Gui-Zhen/Doctor Sun Yat-Sen (American premiere). As the 2012 recipient of the Opera Foundation’s American Berlin Scholarship, she performed 12 roles at the Deutsche Oper Berlin, appearing in repertoire by composers as diverse as Mozart, Bizet, Verdi, Janáček, and Prokofiev. She also sang Giannetta/L’elisir d’amore at Turin’s Teatro Regio. An important highlight of her performances in New York City performances to date was a fully staged production of György Kurtág’s Kafka Fragments. A Yale University and Mannes College of Music graduate, Rosen holds awards from the Gerda Lissner Foundation, The Santa Fe Opera, Central City Opera, the Connecticut Opera Guild, and the Shoshana Foundation.

Canadian tenor Josh Lovell, a second-year Ryan Opera Center member, was a 2017 Metropolitan Opera National Council Auditions semi-finalist. In summer 2018 he performed Count Almaviva/The Barber of Seville at Aspen Music Festival and Don Ottavio/Don Giovanni at New Generation Festival (Italy). Past performances include Ferrando/Così fan tutte with the Ryan Opera Center as well as the University of Michigan (of which he is an alumnus); Lysander/A Midsummer Night’s Dream and Rinuccio/Gianni Schicchi (University of Michigan); and Normanno/Lucia di Lammermoor and Bardolfo/Falstaff (Pacific Opera Victoria). Lovell is a past participant in the Merola Opera Program at San Francisco Opera. While at the University of Michigan, he also workshopped Bright Sheng’s Dream of the Red Chamber, commissioned by San Francisco Opera. Lovell has appeared in concert with the Victoria Symphony, Toledo Symphony, and Detroit Symphony Youth Orchestra, among others. Awards and honors include the Dallas Opera International Vocal Competition, the Opera Birmingham Vocal Competition, the Vancouver Opera Guild, the Marcello Giordani Foundation International Vocal Competition, the Johann Strauss Foundation, and Opera Columbus’s Cooper-Bing International Opera Competition. In 2019 he will join the ensemble of the Vienna State Opera. Last season Lovell debuted at Lyric as Emperor Altoum/Turandot. He will appear this season in Idomeneo, Cendrillon, and Ariodante.

Chicago native bass-baritone David Govertsen has been active as a professional singer for fifteen years, portraying a wide variety of opera’s low-voiced heroes, villains, and buffoons, performing as a soloist with Lyric Opera of Chicago, Chicago Opera Theater, Santa Fe Opera, Tulsa Opera, and Central City Opera. As a concert soloist Mr. Govertsen has appeared with the Chicago Symphony Orchestra, Detroit Symphony Orchestra, Madison Symphony Orchestra, Rochester Philharmonic Orchestra, Grant Park Symphony, Santa Fe Symphony and Santa Fe Chamber Music Festival among many others. He made his Carnegie Hall debut in 2011 as the Herald in Otello with the Chicago Symphony Orchestra conducted by Riccardo Muti. He is an alumnus of both the Santa Fe Opera and Central City Opera apprentice programs and holds degrees from Northwestern University, Northern Illinois University and the College of DuPage. He is currently on faculty at North Park University, Valparaiso University, Lewis University and the College of DuPage.

The Apollo Chorus of Chicago, founded in the aftermath of the Great Chicago Fire, is one of the most recognizable volunteer choral organizations in the United States. Its approximately 130 auditioned members include men and women of all ages, races, and backgrounds brought together by their love of music. The chorus has performed the masterworks of the choral repertoire, as well as new music from contemporary composers. The Apollo Chorus has performed at notable historic events, such as the 1893 World’s Columbian Exposition, the Century of Progress International Exposition, the opening of Medinah Temple, the opening of Orchestra Hall (Apollo was considered the official chorus of the Chicago Symphony Orchestra prior to the formation of the Chicago Symphony Chorus), the opening of Navy Pier, and the “Oprah Surprise Spectacular.” Recent collaborations include appearances with Josh Groban, Chicago Opera Theater, Chicago Philharmonic, and the Netflix series Sense8. The Apollo Chorus continually strives to advance musically and to share the power, beauty, and majesty of choral music by presenting concerts for diverse communities throughout Chicago and beyond.

Tickets are $30-$70, and may be purchased by visiting www.harristheaterchicago.org. For more information about Apollo, call (312) 427-5620 or visit www.apollochorus.org.
Contact
Apollo Chorus of Chicago
Megan Colins
312-607-5757
apollochorus.org