The Marriage of Figaro, Mozart’s masterpiece, is the second production of Florida Grand Opera’s 78th Season. Wolfgang Amadeus Mozart’s intoxicating take on one of the great ensemble comedies ever written, is scheduled for four performances at the Adrienne Arsht Center for the Performing Arts in Miami from January 26 through February 3, 2019, and two performances at the Broward Center for the Performing Arts in Ft. Lauderdale on February 7 and 9, 2019. 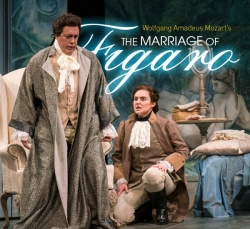 Miami, FL, December 13, 2018 --(PR.com)-- Based on the French play La folle journée, ou Le mariage de Figaro (The Crazy Day, or The Marriage of Figaro) by Pierre Beaumarchias,The Marriage of Figaro is set after the events depicted in Beaumarchais’ The Barber of Seville, in which the wily Figaro helped Count Almaviva win the heart of Rosina, who then becomes the Countess. Now working as the Count's valet, Figaro has fallen in love with Susanna, the Countess's maid. However, the Count's wandering eye has turned to the lovely bride-to-be. Servant and master go head to head, and the Countess herself gets into the action when she learns of her husband’s illicit plans. Or is she embroiled in a liaison of her own with the amorous pageboy Cherubino?

From the breathless opening notes of the overture to the touching final curtain, Mozart’s comic masterpiece brilliantly bucks the conventions of his time to deliver an ageless message of love and forgiveness.

Conducted by Andrew Bisantz, who has received rave reviews from Opera News, The New York Times, and The Washington Post. Directed by Elise Sandell who directed Lucia di Lammermoor in FGO’s 2017/18 Season. Sung in Italian, with projected translations in English and Spanish. Run time is three hours, including one intermission.

Pop Culture:
Thanks to its abundant use in pop culture, virtually everyone knows the music from The Marriage of Figaro:

-The overture has been used in movies including Trading Places, The King’s Speech, Willie Wonka and the Chocolate Factory, and Zombieland. Tim Robbins’ character famously played “Sull 'aria'” over the prison loudspeaker in The Shawshank Redemption, despite knowing the malicious warden would put him in solitary confinement for it.

-The Marriage of Figaro was the second of three plays in a trilogy written by Pierre Beaumarchais during the run-up to the French Revolution in the 1700’s, all of which have been turned into operas. While Figaro and Rossini’s The Barber of Seville continue to be operatic mainstays hundreds of years after they were written, the third (The Guilty Mother) inspired John Corigliano’s The Ghosts of Versailles.

-Although The Marriage of Figaro is one of world’s most popular operas, Beaumarchais’ play was initially banned from being performed by French King Louis XVI, and opera librettist Lorenzo Da Ponte had to rework certain elements of the play to get the opera approved by Holy Roman Emperor Joseph II.

Tickets can also be purchased through the venue box offices onsite and online at the Arsht Center at www.ArshtCenter.org or Broward Center at www.BrowardCenter.org.
Contact
Florida Grand Opera
Kal Gajraj
305-403-3310
www.FGO.org
Director of Marketing and Communications