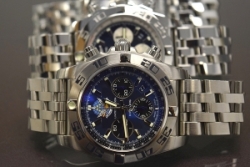 They plan to invest in overseas marketing with the aim of raising the presence of overseas.

Mr. Yuichiro Kitagawa was appointed as a director of Leatherball, Inc.

About Establishment of Bangkok Branch in Thailand
Timepeaks has customers from 80 countries around the world. Therefore, the website is presented into 16 major languages to facilitate easy and safe purchase for customers. Thailand is one of the largest marketplaces of luxury watch auctions, where people access Timepeaks the most.

Foreseeing the opportunity to serve their Thai customers better, Leatherball, Inc. decided to establish a Thailand branch in Bangkok.

With his 20 years of professional experience in trading luxury products, Mr. Theerachai Assavapisitkul and his friend, Mr. Kovit Sarcar who is a prominent watch collector, were appointed the representative of Timepeaks in Thailand.

This branch will serve as a specialised after-auction service provider for Timepeaks' customers in Thailand and run exhibition on behalf of Timepeaks Japan.

Profile of Toru Shimada:
Toru Shimada (Mr.) is a businessperson and an angel investor.
Mr. Shimada is a Chief Operating Officer and Vice President at USEN-NEXT Holding Co., Ltd.
In addition, Mr. Shimada also presents in the boards of other companies.

Profile of Yuichiro Kitagawa
Yuichiro Kitagawa (Mr.) has long been engaged in the field of business development, marketing and management for E-commerce.
Mr. Kitagawa currently holds the position of the President of KG Planning Office Co., Ltd.

About Timepeaks
Founded in 2005, Leatherball, Inc. is an international luxury watch trading company with a renowned reputation in operating an international platform for safe timepiece auction worldwide, "Timepeaks."

Mr. Hitoshi Kyou, the President of Leatherball, Inc., has a vision for Timepeaks to become the world no.1 auction site that guarantees safe trade of luxury watches.

While the Headquarters office is located in Shibuya-ku, Tokyo, Japan, Mr. Kyou carefully selects watch specialists in the countries where Timepeaks operates to provide specialized and trustworthy services to his invaluable customers.