Councilmember Rishi Kumar was present at the ribbon-cutting ceremony for Elon Musk’s first tunnel in Los Angeles for the Boring Company. 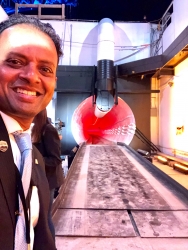 Hawthorne, CA, December 21, 2018 --(PR.com)-- Elon Musk, Founder of The Boring Company, unveiled the first underground tunnel - referred to as the Loop - under the city of Hawthorne. Musk’s vision is to create an underground network of tunnels to reduce traffic congestion, which he refers to as “soul destroying.” Councilmember Rishi Kumar of Saratoga, California, was present at the launch, and congratulated Musk as he emerged from the Loop in a Tesla Model X to address the dignitaries, press, and an exclusive list of “invitation only” guests.

Councilmember Kumar, a senior executive at Silicon Valley’s Solix Technologies, a Big Data Analytics company, had taken a ride in the tunnel earlier that evening and emerged from the tunnel fascinated about what the Loop could mean for Silicon Valley.

“It was quite an experience, a bit bumpy though,” said Councilmember Kumar. “We were traveling at about 40mph in a Model X, guided by car-wash like skates or ‘tracking wheels’ situated by the front tires. Our car was dropped 30 feet into the 12 feet diameter tunnel via an elevator. This prototype clearly demonstrates that we can cut travel time based on the projected speed of up to 150 mph. This is the type of innovative transportation we need in Silicon Valley. It offers tremendous possibilities for Silicon Valley to spread out new housing, spread the wealth and jobs to other far flung, economically disadvantaged communities. This will reduce the pressure to build more and more housing here in Silicon Valley that impacts our quality of life and leads to very frustrating traffic congestion. Our rush hour travel times have tripled and are showing signs of increasing further. A grid of 3-D tunnels crisscrossed with compact street level elevators that drop cars in can be the panacea for our traffic congestion and quality of life woes, connecting Silicon Valley to all parts of the Bay Area and even further.”

Councilmember Kumar envisions these very same tunnels, should they meet the economies of scale, being used for multiple other purposes, such as a 3-D public transportation grid for all of the United States that could enable fast transportation systems such as the Hyperloop.

“We can cut travel time from San Jose to L.A. down to approximately 45 minutes, or from San Jose to Modesto or Stockton to 17 minutes,” said the councilmember. “Such rapid transportation can allow residents to find affordable housing and also reach their place of work in a timely manner. Will it drop homelessness in our state that was gone over the top these past few years? I believe it can definitely help!”

Another important possibility for Councilmember Kumar is the potential to minimize greenhouse gas emissions through the use of the underground tunnels, in which only electric cars are used. “Minimizing traffic logjams will have considerable effects on overall energy waste and air quality,” he said.

Councilmember Kumar stated, “If we can can build a tunnel that costs $1 million a mile, as Elon envisions, or even $10 million a mile, which is what today’s Loop cost to build, then we have to seriously consider the pros and cons of California’s high speed rail system, which will cost almost $77 billion to build 800 miles. Elon Musk’s Loop project could be accomplished for a lot less money and will withstand earthquakes and other inclement weather conditions.”

Musk is currently planning to build Loop systems in both Chicago and Los Angeles, and hopes to have an extensive network of tunnels sprawling underneath Los Angeles before the 2028 Olympic Games are to be held in the city, with one of the early projects planned for Dodger Stadium.
Contact
Giulia Corno
408-621-4341 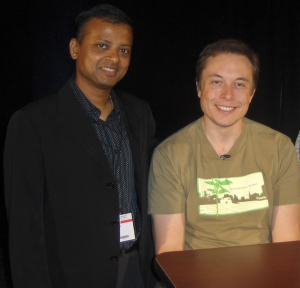 A picture of Councilmember Rishi Kumar with Elon Musk at the oepning of the Loop tunnel.