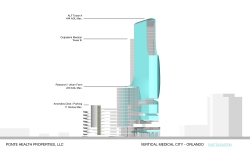 VERTICAL MEDICAL CITY - Orlando is a new $1.1B, 2 Million SF 3-tower project slated to open in 2023 with uses to include primarily Assisted Living and Memory Care, also including Class A Medical Office Space and a Research and Development Facility. The Project's Public Courtyard is projected to be approximately 0.75 acres (32,670 SF) and has a projected circulation of 1,500-2,000 people daily.

The team's timeline for the next few months includes a Site Plan approval process simultaneous with Master Plan approval working alongside the City of Orlando and other public agencies, tasks to be finalized before the summer to break ground later this year.
Contact
Ponte Health, P.A.
Tabitha Ponte
321-300-6670
www.pontehealth.com
Email project inquiries to:
verticalmedicalcity@icloud.com