Language of Aroma: A Documentary on Communicating a Forgotten Sense by TEALEAVES

TEALEAVES, luxury tea blender, brings together top names in perfumery, language design and accessibility to explore how we can describe this puzzling sense. 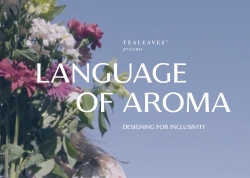 Vancouver, Canada, April 02, 2019 --(PR.com)-- Today, luxury tea brand, TEALEAVES, released Language of Aroma: A Documentary on Communicating a Forgotten Sense, that asks the question: what if we could recognize, understand and communicate aroma? How might we connect with ourselves and the world? It features leading experts including Margaret Price, Principal of Inclusive Design at Microsoft, Laurie Pressman, VP of Pantone, Game of Thrones Language Creator, David J. Peterson and Wolfgang Georgsdorf, the inventor of a scent organ capable of helping depressed people.

Our sense of smell is hardwired to dictate comfort, fear, and mate selection, yet in a recent study by McCann Worldgroup, 53% of 16-22 year olds stated that they would rather give up their sense of smell than their smartphones. With technology, threatening to erode the emphasis we place on our senses, TEALEAVES drew in the knowledge of experts like sommeliers, chefs, aroma scientists and designers to explore the importance of aroma in our experience of the world, and the difficulty in describing it without a learned vocabulary.

“The world of aroma has traditionally borrowed its language from the other senses. We often refer to aroma in every other way - music, tactility, taste...Anything but actual aroma,” says Lana Sutherland Co-Founder and CEO of TEALEAVES.

"When we craft custom blends for our clients, just like the world of wine, we describe the aromatic experience in metaphors, which are inaccessible and unique to us."

“However, inclusivity is in the nature of tea: We see tea as both a catalyst for conversation as well as a companion in quiet moments of introspection. The beverage has a long history of being a sign of welcoming, respect and hospitality, of bringing people together across cultural barriers and differences, but when we lack that shared vocabulary to bring words to those experiences, we are unable to share those moments,” says Lana Sutherland.

To understand aroma from the angle of Inclusive Design, TEALEAVES partnered with Microsoft Design, a leader in the field of accessibility, to explore visuals, texture, form, and other means of aromatic communication. “This exploration is important in highlighting the ways aroma can positively impact society. It’s particularly interesting as we explore how to evolve the inclusive design practice at Microsoft in new directions embracing all senses. How might we apply inclusive principles to aroma? Just imagine the possibilities,” says Margaret Price, Principal Design Strategist at Microsoft. “Aroma has the ability to inspire or transport, ultimately enhancing the human experience. People have multiple senses working together at any given time. When one sense cannot be used, how can another? Our role as experience creators isn’t to 'fix' what someone is 'missing' but to fully leverage the way we interact with the world.”

The documentary can be viewed online at languageofaroma.com/documentary

Language of Aroma was released through an online experience, languageofaroma.com, a collaboration between TEALEAVES, Microsoft Design, global color authority PANTONE and UBC Science that showcases the creative ways in which aroma can be communicated through the left and right brain. The experience features the tea cocktail, tea entree and tea dessert creations of 17 world-renowned chefs and mixologists using TEALEAVES Classic Teabags and the PANTONE color pairing as muse, and has gained traction among foodies.

This exploration is the second in a three part series by TEALEAVES entitled “PALATE,” which explores three main design elements of tea blending: Color, Aroma and Taste. Language Of Aroma builds upon TEALEAVES’ previous film Color In Sight, which dove into the importance of the detail of color in design featuring top brands including Nike, OPI, Herman Miller, Pantone, and artists such as KidRobot and Frank Kozik, which was also featured at SxSW 2017.

Language of Aroma was featured at a panel at SXSW 2019 in Austin Texas, March 10, which brought together several experts featured in the film over a panel session to discuss inclusive design and the language of aroma.

SXSW 2019: Sunday March 10th
Language of Aroma was selected for a panel at SXSW 2019 in Austin Texas, which brought together several experts featured in the film over a panel session to discuss inclusive design and the language of aroma.
Location: JW Marriott, Austin TX,
Time: 11:00am-12:00pm local time

Language of Aroma features the following experts of industry and academia:

Established in 1994, TEALEAVES is one of the very few tea blenders in the world, known for crafting the highest quality teas in small batches by hand. TEALEAVES strives for perfection, driven by the never-ending quest to make the perfect cup of tea. With the philosophy of inspiring creativity and connections through the art of blending, TEALEAVES has gripped the hearts and minds five-star hotels and Michelin Star chefs, worldwide, as their tea brand of choice for over two decades. Sourcing ingredients from over 90 countries and keeping only 1% of the tea leaves presented to them from the world's highest grade gardens, TEALEAVES hopes to stay people’s “cup of tea” for generations to come, whether in a five-star environment or in the luxury of one’s home. More information is available at TEALEAVES.com.

Microsoft is the worldwide leader in software, services and solutions that help people and businesses realize their full potential. Microsoft Design is the pioneer of Inclusive Design in the technology industry.

More information is available at TEALEAVES.com.