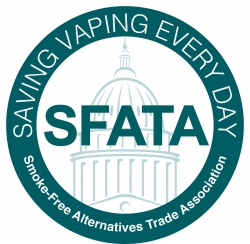 With an invitation that advised: Be There or Be Silenced, Manufacturing Executives Convened at the First North American E-Liquid Standards Summit

With the sole purpose of facilitating an in-depth review of Good Manufacturing Practice (GMP) standards and standards development by manufacturing executives, individuals responsible for compliance and manufacturing and with a broad knowledge of GMPs for their businesses, met late in June in Manhattan Beach, California. At the conclusion of the two full days, the attendees, representing vapor E-liquid manufacturers and subject matter experts from the United States and Canada came away with a full set of prescriptive solutions and proposals for lawmakers.

CVA’s Executive Director, Darryl Tempest said this of the meeting, "Our goal was to create a set of standards that can be used in both the U.S. and Canada so that manufacturers have a streamlined set of standards and consumers have a reliable product."

SFATA’s Executive Director, Mark Anton explained: "SFATA has always supported the need for sensible regulation of the vapor industry. During a meeting in April 2018 between SFATA leadership and then FDA Commissioner Scott Gottlieb and Center for Tobacco Products Director Mitch Zeller, our discussions were focused on the need for industry-specific standards."

Shaun Casey, Board President of CVA, who was instrumental in the creation of NAVA, went on to state, “NAVA is committed to not just the survival of the vapor category for all sized companies, but we want it to thrive and expand as more people quit smoking deadly cigarettes. We understand better than most the need for representation in the creation of these standards protocols, and that this can best be accomplished by a united industry. Working together, we can develop achievable consensus benchmarks that will codify our commitment to consumer safety.”

When asked for her thoughts on the Summit, SFATA Board President, April Meyers agreed with Anton’s sentiments and went on to say, “It was clear in our meeting with then-Commissioner Gottlieb that the Agency is looking to us (the vapor industry) for solutions. Since that meeting, it’s become our goal to develop professional-level manufacturing standards for e-liquids, hardware, and retail accreditations. Doing so will bring clarity and certainty to the industry and create a more solid foundation on which it can flourish and grow. This summit is another step in the process of accomplishing that goal.”

In the coming months, the FDA will be proposing an Advance Notice of Proposed Rule Making (ANPRM) for electronic vapor product standards. SFATA believes it imperative that the industry be united and intrinsically involved in developing the rules that will govern the industry.

AEMSA President, Scott Eley summarized, “FDA will be going through an Advance Notice of Proposed Rulemaking for electronic vapor product standards. AEMSA has been in the standards business for more than five years now. As noted, together with the other Alliance partners, we are in the process of updating a second generation of e-liquid manufacturing standards and developing new standards that will be state-of-the-art for e-liquid components, hardware, and accreditation standards for retailers. Producing Generation 2 standards with NAVA will help guide the FDA in that process. As is done in Canada, electronic vapor products must be regulated in a separate category from tobacco.”

Based on its discussions with FDA, SFATA knows the Agency views standards as a critical part of successful regulatory framework, and that the Agency is looking for leadership from the industry. SFATA plans to provide input to FDA from the work accomplished with AEMSA and CVA in this alliance. With this Summit, one of the most important regulatory procedures will be accomplished, one which will allow electronic vapor products to meet mandatory professional manufacturing and retail standards, so that innovation for new products is incentivized, and ultimately, regulated to promote public harm reduction.

About SFATA:
SFATA is the premier and largest vapor and e-cig trade association. The association represents the interests of the entire supply chain, including manufacturers, online retailers, brick and mortar vapor store, distributors, importers, and wholesalers. For more information about SFATA, visit https://www.sfata.org and follow SFATA on Facebook, Twitter, and Instagram.