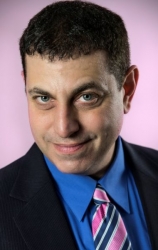 Dark Specter 2 is the story of an unknown supervillain who seeks global infamy. Yet, with many life challenges standing in his way, we see that the Dark Specter is all but your typical one-dimensional comic book villain.

With Bruce’s acting foundations rooted in comedy, it is his portrayal of the Dark Specter which shows his versatility. His character faces many challenges including obligation to family and the struggle towards self-actualization. Bruce’s unique skill of tapping into the full spectrum of the character’s emotions is what has caught the attention of film festival judges across the country. Indie Shorts Magazine called Dark Specter 2 “a brilliant take on the superhero genre, subverting the paradigm, well supported by a stellar cast and incredible writing.”

Earlier this year, Bruce also made his directorial debut with the short film Lunchtime Is Over. Dubbed a “combat - comedy,” the film depicts a group of warehouse workers, led by Bruce’s character, who become disgruntled when their lunch is cut short by middle management. Conflict ensues and escalates to a fully choreographed stunt-fighting scene. The idea for Lunchtime Is Over was conceived when Bruce was taking Mike Chat’s XMA stunt class in North Hollywood. “At first I just wanted to try out these new stunt skills I had learned in class and put them on film,” says Bruce. “But then I thought, why not turn this into a story everyone can relate to? We then decided we’d like it to be a comedy.”