Something Big is Brewing at World Famous Randy’s Donuts 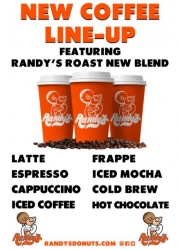 Known for doing things big, Randy’s Donuts, the world’s most recognized donut shop, today announced it will be offering guests a free cup of coffee to celebrate the launch of their new coffee line-up and new Logo. Every guest that stops by their Iconic Inglewood or El Segundo locations on Monday, September 23 from 6am to 6pm will get a free 12 oz. cup of their new premium Randy’s Roast brewed hot coffee.

“We want to celebrate the launch of our new coffee line-up by giving back to our customers who’ve visited us repeatedly over decades and helped make us a pop-culture icon,” said Mark Kelegian, President of Randy’s Donuts. “Our beloved fans all stop to buy donuts and snap photos outside our landmark shops. Now, they’ll be rewarded with a free cup of premium Randy’s Roast.”

Randy’s currently has four locations in the greater Los Angeles area – Inglewood, Century City, El Segundo and Hollywood. A new corporate location in Downey is slated to open in October, and several others are planned for 2019 & 2020. Earlier this year, the company announced plans to franchise the concept domestically and internationally. The brand opened in S. Korea in September and has signed deals to bring its word-famous donuts to Saudi Arabia and Philippines in the Fall of 2019. Randy’s signature 32-foot novelty architecture donut sits atop the original Inglewood shop and is a top tourist stop, attracting thousands of customers to pose for photos.

“We already have the best high-quality handmade donuts. Now, we have an equally great coffee line-up that is also value priced,” said Thomas Bartsch, head of Marketing. “We’ve also updated our Baker Boy logo adding a steaming coffee cup, because nothing goes better with donuts than coffee.”

For nearly 60 years, Randy’s has been a taste, pop-culture and architectural icon: Its donuts are handmade daily with proprietary, highest-quality and never-frozen ingredients and mixes. The business has been featured in countless movies, television shows and music videos such as Jimmy Kimmel Live! with Christina Aguilera, Iron Man 2, Futurama, The Tonight Show with Jimmy Fallon and the MTV Movie Awards.

For more information about Randy’s Donuts and its franchise opportunity, visit randysdonuts.com/franchise.

About Randy’s Donuts
Based in Inglewood and with four California locations, Randy’s Donuts is the most recognized donut shop in the world and one of the most iconic locations in Los Angeles, attracting visitors from around the world to take pictures of the giant rooftop donut. Immediately recognized as the landmark building from appearances in movies, music videos and television shows, Randy’s has consistently been named one of the top donut shops in the country for nearly 60 years and the most-reviewed and highest-rated donut shop on Yelp and similar sites. Whether it’s a first visit or a local, one taste of Randy’s donuts made by hand every morning brings customers back time and time again. Connect with Randy’s Donuts on Facebook, Twitter and Instagram @randysdonutsla, LinkedIn and on Tik Tok @RandysDonuts. Learn more at randysdonuts.com.
Contact
Randy's Donuts
Thomas Bartsch
323-868-2404
www.randysdonuts.com 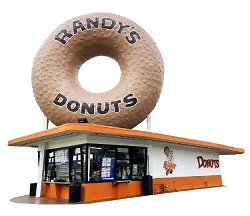