An award winning short romance “Call Me” is coming back to Los Angeles as part of the 8th annual Marina del Rey Film Festival and will be screened in high quality settings at the Cinemark 18 and XD (HHLA) at The Promenade at Howard Hughes Center on Thursday, October 24 at 9.30pm. 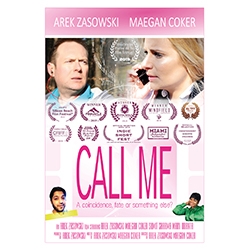 Los Angeles, CA, October 22, 2019 --(PR.com)-- After winning Best Romance Short award at the 2019 Silicon Beach Film Festival in Los Angeles earlier this year, “Call Me” is returning to the film capital of the world as an official selection by the Marina del Rey Film Festival.

“It will be fantastic to see 'Call Me' being screened again with the live audience at such a prestigious independent film festival. The annual Marina del Rey Film Festival was voted as a Top 100 Best Reviewed Festival by FilmFreeway. It is terrific to see our short romance in such a high quality venue, Cinemark 18 & XD, in Los Angeles,” says the director and “Call Me” star Arek Zasowski as he is preparing to depart from London, England, to join the film festival for the live screening on Thursday, October 24 and the “Best of the Fest” film awards presentation ceremony held on Friday night, October 25.

In “Call Me” Arek Zasowski is portraying doctor Vince Williams who is connected with a fashion model Julia, played by an American actress Maegan Coker, by a mysterious cell phone that Vince found in the forest. “Call Me” is the second short film written directed and starred by Arek Zasowski, with Maegan Coker, Sumit Sharma, Mary Uranta, Viola Zasowska, Aemy Niafeliz, Paul A. Taylor and Olga Malchevska amongst other talent.

“If you enjoy watching love stories and romance genre, and you have not seen 'Call Me' yet or maybe you would like to see it again on a big screen in Los Angeles please come to the festival. The screening of the film will be followed up by a Q&A session,” says Arek Zasowski, so if you would like to meet the cast and ask a question, and also to receive a special edition postcard from “Call Me” signed by Arek Zasowski. “Please come and join us on Thursday night, October 24, at the Marina del Rey Film Festival and celebrate together such a fantastic film event,” says Arek.

“Call Me” is a short romance between doctor Vince Williams (Arek Zasowski) and a fashion model Julia (Maegan Coker) connected with each other by an old cell phone which Vince found in the forest. Whilst examining the handset’s contacts list, Vince discovered that it contained only one contact name mysteriously entitled CALL ME. Intrigued, Vince decided to call the Call Me person to find out who is on the other side of the line.