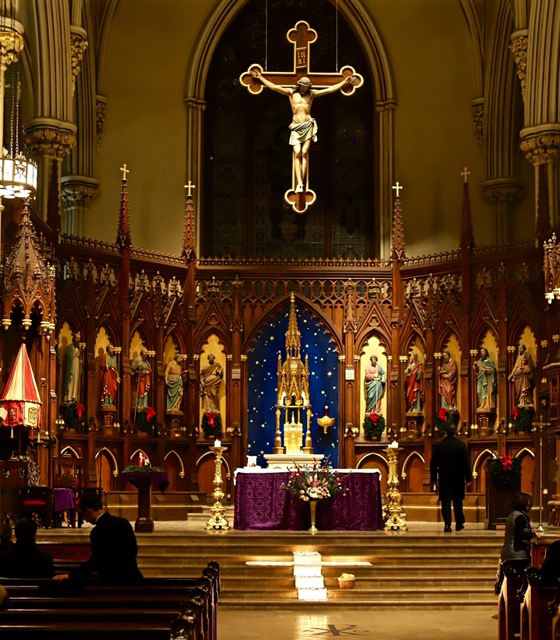 New York, NY, December 19, 2019 --(PR.com)-- Dozens of street missionaries, led by Steve Auth, author of “The Missionary of Wall Street” and Chief Investment Officer, Equities, at Federated Investors “FII,” completed another successful street mission this weekend in New York City. The mission began during New York’s bacchanal “Santa Con” and Auth’s missionaries had a multitude of engaging spiritual encounters with Santa Conners and Christmas shoppers who were on the streets with a different agenda but ended up in Saint Patrick’s Old Cathedral to pray instead. On a related front, “The Missionary of Wall Street” was named to the Catholic Herald’s “Top Seven Spiritual Books of 2019” this week as well.

On Saturday, occasional driving rain and falling temperatures did not dissuade Auth and the Advent Missionaries or the thousands revelers dressed for Santa Con from hitting the streets of SoHo. The Santa Con participants were on a mission of their own, and the intersection of the two groups yielded some surprising results. While the missionaries reported that many of the Santa Con revelers were not in the mood, or the condition, to engage in meaningful conversation, there were several notable encounters that led some of the Santa Con participants to take a rosary instead and go home or to church. Lines at the confessionals in Saint Patrick’s Old Cathedral that night were at times seven people deep.

On Monday the missionaries returned to the streets, reinforced by 60 Catholic seminarians spread throughout SoHo. Passerbys were invited to talk about their faith and to come to the church to light a candle and say a prayer. By the evening’s end, the cross of candles at the foot of the altar was blazing bright. In the far reaches of the parish, blocks from the church, the missionaries manned wooden crosses for passersby to nail their Christmas prayer intentions to.

Many of the missionaries reported touching encounters with individuals who felt particularly lonely during the holiday season and who were overjoyed to connect with someone who truly wanted to listen to their concerns and offer the comfort of the Lord. While many of souls touched by the missionaries were initially too busy or hurried to be bothered, kind words and encouragement led many of them to open up about their relationship with God and concerns about religion. A band of joyful missionary musicians helped to draw onlookers and spark conversation. Many of the strangers encountered by the missionaries returned to Saint Patrick’s to light a candle, attend confession and connect with God and each other.

The story of the Missionary of Wall Street and the New York City missionaries can be found in the pages of Auth’s book, “The Missionary of Wall Street,” which is available on Amazon in both ebook and print. Readers can also follow the work of the missionaries and read updates on the Advent Mission by following the book and Steve Auth on Facebook and by reading updated blogs on the book’s website.
Contact
Dion Family Foundation
Donald Dion
413-281-8341