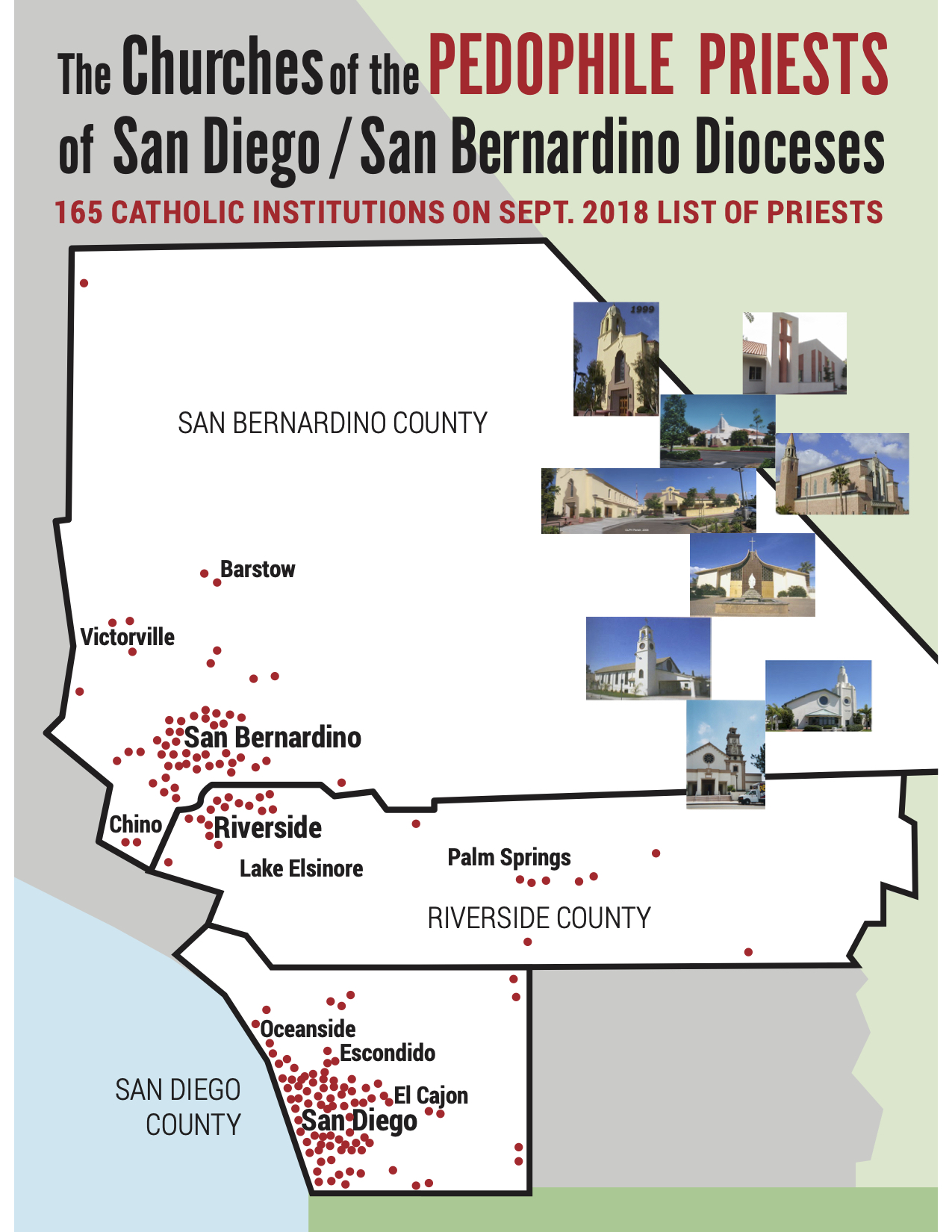 “Allegedly, victims have suffered for years from their abuse and now thankfully they can come forward to tell their stories and seek justice,” said Irwin Zalkin, attorney for the alleged victims.

The Zalkin Law Firm says they are filing claims in groups. The first group of lawsuits alleges six serial pedophile priests, who were known abusers to the San Diego Diocese and some of whose names are now on the list of credibly accused priests released by the Diocese in September of 2018. (https://www.sdcatholic.org/portals/0/Images/includes/List-of-Priests-published-091418.pdf)

Zalkin alleges the twenty Plaintiffs in these new lawsuits were all sexually abused by their priests as young boys while serving as altar boys or during other church activities. The Complaints allege how these priests would “groom” their young victims and sexually molest them on church property or using their vestments as Roman Catholic Priests, over a period of years. The Complaints further allege the Diocese and the Bishop were aware of the history of sexual abuse by these priests and their failure to take any actions to protect children in the parishes from these pedophile priests.

“These claims handled by our firm are part of a wave of new lawsuits,” said Zalkin. “These new lawsuits demonstrate the importance of AB 218 for the adult survivors of priest abuse. Our clients have allegedly suffered silently from their abuse for years and now will have the opportunity to seek justice and publicly tell their stories in a court of law.”

According to Zalkin, “Several clients explored the alternative compensation offered by Catholic Dioceses under the ‘Independent Compensation Fund’ announced in September, 2019. However, they have chosen to seek justice and compensation through a civil lawsuit instead.”

“We believe that the best way to expose wrongdoing and enforce accountability is for crimes to be made public and for accountability and compensation to be meted out by courts, not the institutions that allowed the wrongdoing to happen in the first place,” said Zalkin. “Survivors deserve a chance to have their day in court to shed light on their abuse, expose known perpetrators, and that can only happen when statutes of limitations are reformed, civil windows are opened, and bishops are held accountable in courts of law.”

Each Complaint details numerous Causes of Action against the Parishes and Diocese including: Negligence, Negligent Supervision/Failure to Warn, Negligent Hiring/Retention and Sexual Battery. The Plaintiffs also allege severe and sustained emotional and psychological injuries and loss of earnings. The Complaints seek compensatory damages, and costs and Zalkin anticipates amending the complaint to seek punitive damages after litigation commences.
Contact
The Zalkin Law Firm
Irwin Zalkin
858-259-3011
zalkin.com

This Complaint was filed with the San Diego Superior Court on January 2, 2020 (see date stamp) on behalf of five Plaintiffs who alleged they were sexually abused.