What is a Human Being? Newly Released Book by the Institute of Human Thermodynamics, The Human Molecule (2008), Answers the Question.

Newly released book: The Human Molecule, a short 120-page publication on the history of the concept of the person as a “human molecule”, by American chemical engineer Libb Thims, founder of the Institute of Human Thermodynamics, was approved for distribution on April 10, 2008 and is being listed with Bowker’s Books In Print. It is currently available at the publisher's website (LuLu.com) for $9.95 paperback or download (PDF) and will be available on Amazon and other online retailers soon. 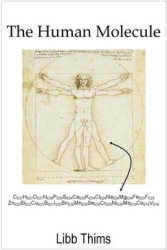 Chicago, IL, April 16, 2008 --(PR.com)-- The new 2008 book The Human Molecule (HumanMolecule.net), by American chemical engineer Libb Thims, traces the historical development of the conception of the human being as an individual ‘molecule.’ The question of what is a ‘human’ has passed down through the ages as an unsolved riddle of curiosity.

In partial solution to this query, the term “human molecule”, as the definition of a person, was coined in 1869 by French philosopher Hippolyte Taine; the first rudimentary social, economic, and historical theories using the human molecule concept were developed in the early 20th century by those as Leon Walrus, Vilfredo Pareto, Henry Adams, and C. G. Darwin; and the first calculation of the molecular formula for a human being was made in 2000 by American limnologists Robert Sterner and James Elser.

In modern terms, a person is defined as a 26-element reactionary molecule attached to substrate. The implications of this new philosophy point the way to a revolution in thought in areas such as life, work, free will, reactivity, marriage, purpose, and evolution.