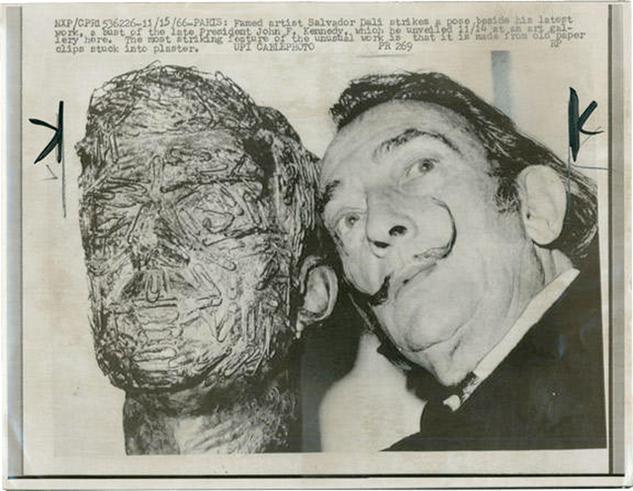 New York, NY, July 02, 2021 --(PR.com)-- It is 1962 and JFK proclaims to the world United States will land on the moon by the end of the decade. His vision for the future was only possible by cold war efforts of code name “Operation Paper Clip.”

Perhaps the paperclips are a nod to “Operation Paperclip,” where German scientists were recruited in secret to come work in the United States, mainly to assist the U.S. in the Space Race with Russia.

In May 1961, President John F. Kennedy declared his intention of getting an American on the Moon before the end of the decade. Although he would not live to see it, his wish would be fulfilled on July 20, 1969. Fifty years later, the dawn of the new space race has begun, as we explore Mars as a potential new destination, and it is to John F. Kennedy that we owe the ability to navigate the final frontier. This sculpture is the link between two of the most famous figures of the 20th century, John F. Kennedy and Salvador Dalí. Dalí created a cast of Kennedy’s face before he was assassinated in November 1963. Dalí produced this sculpture in 1965, created by using bronze with a green varnish and paperclips attached all over the surface. It was cast in an edition of only 6. This work is editioned 1/6. Dalí’s motivations for using paperclips are open to interpretation. On the sculpture they seem to resemble bees or grasshoppers, which were both used by Dalí as symbols for death and destruction. With that in mind the sculpture takes on the air of a death mask, although it is a lifetime cast. Death masks were made from a subject’s face following their recent passing. Dalí could not have known at the time of the casting that this would in essence become Kennedy’s death mask, as he was doomed not to see the end of the year. Perhaps the paperclips are a nod to “Operation Paperclip,” where German scientists were recruited in secret to come work in the United States, mainly to assist the U.S. in the Space Race with Russia. Kennedy worked with Kurt H. Debus, a rocket scientist from Germany who became the director of NASA’s Launch Operations Center. As the 50th anniversary of the Moon Landing is celebrated, the importance of this sculpture becomes clear. Dalí put his twist on Kennedy’s likeness, adding a surrealist touch to the figurative head creating a visible blend of both men into one work. Both were figures that will forever live on in American and World history alike.