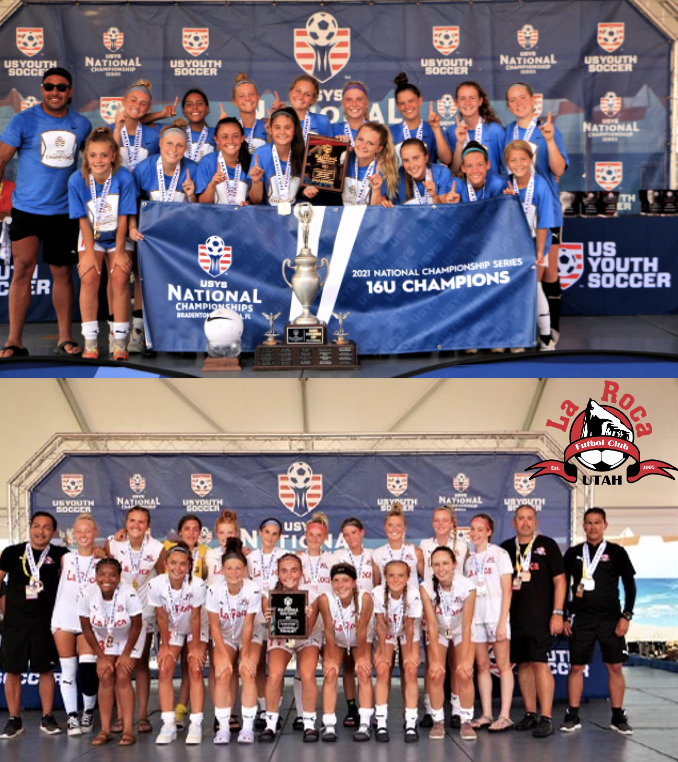 South Weber, UT, July 27, 2021 --(PR.com)-- July 25, 2021 was an historic day for La Roca FC as they secured their first USYS National Championship in the club’s history. Reaching the high-pressure, weeklong event in Bradenton-Sarasota, Florida, is the pinnacle accomplishment for competition youth soccer teams. Each year, rigorous state and regional competitions are held to determine the most qualified teams to represent their state at Nationals. Only a few teams ever get this opportunity. Of the nine Utah teams competing in Nationals, La Roca FC had the prestigious honor this year of having four teams, the most teams from any club in the state.

With the stakes even higher this year, as this competition was cancelled last year due to COVID, teams participating not only felt the burden to perform but relished this rare opportunity as they know how easily it can be taken away. The teams representing La Roca FC and the State of Utah were the 2005 Girls coached by Pancho Ovalle, 2006 Girls coached by Felipe Diaz, 2006 Boys coached by Danny Acosta, and the 2007 Boys coached by Jose Milla.

“I told him that the third time’s the charm, or as they say it in Chile, 'la tercera es la vencida,'” said La Roca FC’s Founder and Technical Director, Adolfo Ovalle as he was speaking to his brother Pancho. Pancho’s 1999/2000 girls and the 2001/2002 girls’ teams have been in the USYS National Championship twice before, but neither team won the national title. “I told him that this was a special group of girls and that I knew this third time was going to be different. Words can’t express how truly proud I am of him and this team and of all the La Roca teams participating. I couldn’t ask for a finer group of people to work with.”

“I just told the girls to keep playing your game – the romantic game,” said Pancho Ovalle, the coach for the 2005 girls winning team. “I know these girls. I know their hearts. I train with them four times a week and I know how bad they wanted this. I am so proud that they didn’t stop. They didn’t doubt themselves. They stayed positive and encouraged each other to give it all they had and leave it on the field. It was truly a magical moment. One that I’ll remember my whole life.”

Ovalle’s 2005 players had much to say on the experience in Florida. Nevaeh Peregrina, an attacking midfielder said, “It truly was such an unrealistic and unbelievable feeling. We have worked so long and hard to get where we are today, and all of those days of brutal training finally paid off. I have such an amazing team and these girls are like my sisters, our team is seriously like a family, and I think that is why we work so well together on and off the pitch.”

“It’s such a competitive environment and everyone just wants it so bad. At the end of the day, I think it comes down to who works the hardest, which is why I believe we won. It’s such an amazing and rewarding feeling to finish the way we did and have this outcome. I’m so proud of my team and all that we have done to get here,” said Annie Boyden also an attacking midfielder.

Kimber Sederholm, a forward, couldn’t contain her excitement, “Winning Nationals was definitely the best feeling! We have come so far and worked our butts off for the past months and all the work finally paid off. I am so grateful to have a team and a coach that pushes me to do my best and always has my back. I love them very much and I am so proud of them. This was the best experience, and I am so lucky that I get to share it with them!”

A second USYS Championship was also within reach for La Roca FC’s 2006 girls’ team coached by Felipe Diaz as they advanced to the Finals after winning their semifinal match. They competed whole heartedly in the Finals but came up short in the end with a loss to Solar SC from Texas. Honorable mentions also go to the 2006 Boys team coached by Danny Acosta and the 2007 boys team coached by Jose Milla as they competed hard but didn’t advance beyond pool play.

“It was an honor to be in Florida as Director of Coaching representing La Roca FC. I appreciate our amazing team managers as we couldn’t have done it without them. USYS was fantastic and provided top notch fields and referees as was the support from UYSA – honestly, everything was perfect. Finally, after many years losing in the Finals with several teams, we are so proud to say that we are National Champions. We established our club in 2005 and the girls born in that same year just gave us the first championship. Happy Sweet 16 La Roca!” said Ariel Bravo, who has been coaching for La Roca FC since the club’s inception in 2005

As the teams return home and the celebrations die down, the journey for La Roca FC doesn’t stop. The love and enthusiasm to continue to develop each player is still forefront in the club’s philosophy, and the cycle continues for the next team and the next player. When La Roca FC reaches one goal, they set their sights on even higher goals. The motto for the club is developing greatness: great players, great coaches, great students, great human beings. With each game, La Roca continues to refine and enhance its proven pathway to a professional career or collegiate level. To date, nineteen La Roca FC players have secured professional contacts and over 500 players have secured college scholarships with many more on the horizon.

About La Roca FC
La Roca Futbol Club was established in 2005 to provide a quality competitive youth soccer program in Utah and has grown to become the most successful club in the state with more State Cup Championship titles than any other club in the state. La Roca FC trains serious youth soccer players who desire an opportunity to develop and showcase his/her skills to the fullest potential. To date, La Roca has produced 19 professional players both domestically and internationally. La Roca FC offers players a chance to play at the highest level of state competition and compete in various regional and national tournaments and leagues. La Roca is a 501(c)(3) corporation under the direction of its Board of Directors.
Contact
La Roca Futbol Club
Heidi Wheelwright
801-825-6040
larocafc.com