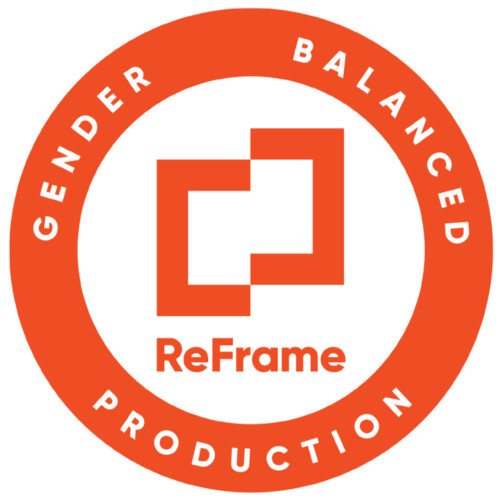 Los Angeles, CA, September 29, 2021 --(PR.com)-- Hard Knock Productions and 1157 Productions announced today that Serpentine Pink received the ReFrame Stamp for 2021 – an inclusivity recognition mark distinguishing gender-balanced productions created by Sundance Institute and Women in Film, presented in partnership with IMDbPro. ReFrame is an initiative employing a unique strategy to implement systemic change programs to mitigate bias during the creative decision-making and hiring process, celebrate successes of women in film and measure progress toward a more gender-representative industry on all levels.

Serpentine Pink is led by a female director, cinematographer, writer, executive producer, and cast driving a women-centered storyline. The film’s director, Vivian Sorenson, began her career as a theater director in the '90s. With many doors closed in her face as all the jobs went to men, she switched lanes in her career path, working her way up to Showrunner. Sorenson’s reflection on the industry is hopeful: “I am finally returning to this work, full circle, and for sure a 'reframe' is happening. Directing the incredible Serpentine Pink feature film is part of my return and with every cell in my body it feels so right and where I am supposed to be, directing and supporting women writers but also stepping back into the shoes I left behind, however this time with more support and thus more confidently, and with swagger. Let's keep this change happening. Rise up and be a badass. It's time.”

This film is women-driven in every aspect of creation, including cast, crew and its genesis. Writer Megan Breen relays: “As a female screenwriter writing stories with female protagonists who wrestle with issues that are directly affected by their gender, Serpentine Pink receiving the ReFrame stamp is such an honor and absolutely vital to progressive, gender-forward filmmaking.”

Breen highlights the power of the ReFrame stamp for not just Serpentine Pink, but for rising the tide of female representation and industry development: “The ReFrame certification will not only attract artists and audiences alike to engage with our film and consider its healing-focused themes combatting violence against women and the stigma of trauma, but encourage and affirm the notion that gender-balanced productions like ours are integral to authentically telling these underrepresented and diverse stories, furthering our mission to create nuance and empathy in our filmmaking.”

Serpentine Pink
Set in the desert-weird wilds of Joshua Tree, California, Serpentine Pink is a distinctively visceral and surreal independent, female-centric film that digs into the various and rigorous ways a heart heals from trauma. Inspired by France’s Grand Guignol style of horror theatre, and utilizing a lyrical language both visual and verbal to capture the strange poetry of the Mojave land and soundscape, Serpentine Pink follows a reclusive biker woman and her John Wayne-obsessed exotic dancer lover’s disturbing fallout after a violent acid attack. An ethereal psychic and her aspiring healer companion converge with supernatural forces in an attempt to confront and then heal the women’s – as well as their own - deep-rooted, personal pain that comes from trying to break the cycle of possessive love.

About Hard Knock Productions
HKP was founded in 2020 with a mission to inspire audiences into activism to deliver sustainable positive social impact. We believe in promoting unique voices through alternative storytelling. This means developing powerful stories that increase the visibility of underrepresented persons in diverse roles both in front of and behind the camera, innovating to reduce environmental impact, and partnering with organizations to advocate and educate.
Contact
Hard Knock Productions
Larissa D'Andrea
(619) 857-0624
www.hardknockprod.com