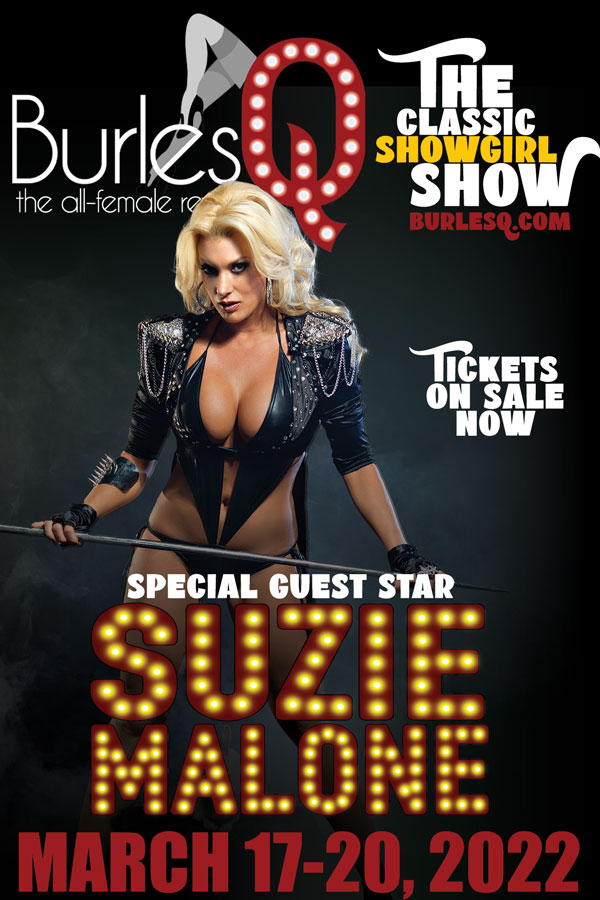 Malone, Exotic Dancer Magazine’s Club Favorite Entertainer of the Year, who’s appeared in seasons 6 and 11 of America’s Got Talent and in the Nicole Kidman feature film “Moulin Rouge” and TheRichest.com’s Top Exotic Performers list, has graced stages all over the world, is no stranger to Las Vegas. She was the host and creator of “Le Magique Fantastique,” a resident production show at Bally’s Hotel and Casino.

Pete Housley, Executive Producer for BurlesQ and Late Night Magic said, “We’ve been watching Suzie’s career as a Las Vegas entertainer for years; and it’s a real sweet treat for her to join us as a guest star for two of Las Vegas’ premier adult’s only production shows.”

Suzie Malone will perform her signature act alongside the celebrated cast of BurlesQ; the classic showgirl show Thursday March 17-20, 2022 at 9:30pm. BurlesQ is a couples-friendly, modern twist on the classic showgirl shows from the glorious Las Vegas retro era. The show, staged by renowned director/producer Cari Beyers, features a rotating cast of classically trained dancers and variety acts.

Late Night Magic, a 2021 Best of Las Vegas winner, along with its award-winning cast of misfits will also feature the amazing Suzie Malone in a guest star role March 18-19, 2022 at 11pm. Late Night Magic created buzz in 2021 as an adult-themed, late night magic show in Las Vegas. This riotous show is not your average magic show; and you most definitely should leave the kiddos home for this one.