In War, We Jest 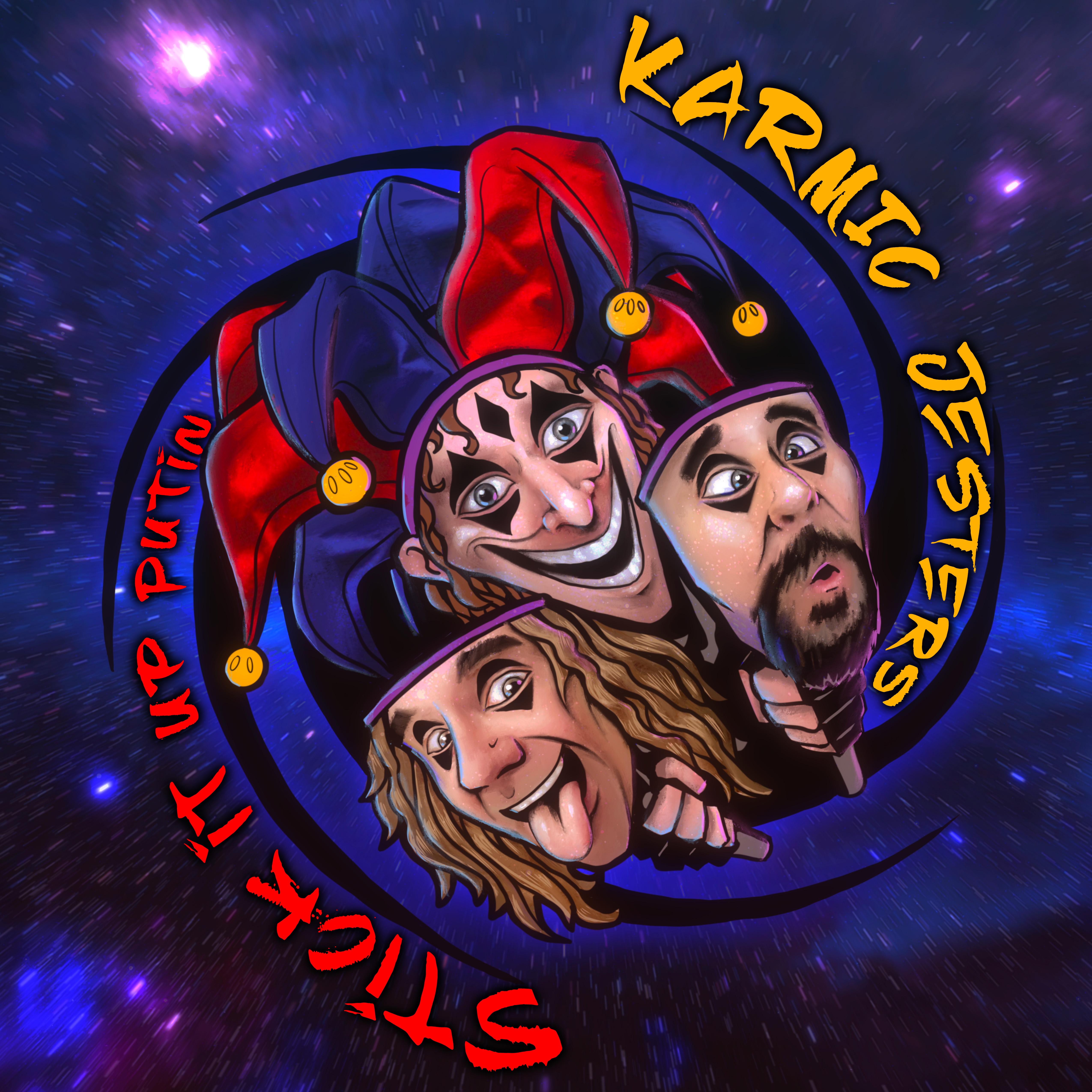 Los Angeles, CA, April 06, 2022 --(PR.com)-- Karmic Jesters, the genre-fluid band that truly defies labels, drops debut single, "Stick It Up Putin," a bitingly, singable anti-Vlad parody protest tune. Feel free to sing along, as it just might liberate you and help sustain Ukrainian war refugees, too. "Stick It Up Putin" is a free download at: https://karmicjesters.com/music. Direct donations to World Central Kitchen to support sustaining Ukrainian refugees are encouraged through a dedicated button at the Karmic Jesters download site or at donate.wck.org.

Download and listen up: you’ll think you’ve tuned in to a Dr. Demento Show that you somehow missed, while tanks were rolling into the Donbas region of Ukraine. The Pentecostal-pop ditty, "Stick It Up Putin," is akin to a jaunty hillbilly jamboree at an Amy Semple McPherson revival.

Karmic Jesters transcends traditional music categorization; their signature sound is somewhere between and includes Polka to Punk. "Stick It Up Putin" has a twangy hometown vibe, truly an ideal Americana contrast to the Battle of the Ice antipathy that’s conjured up by the infamous Nazi-hunter and protector of the innocent, Vladimir Putin.

“It only takes one ass to stink up a room,” notes Tim Boggs, one of two Karmic Jesters, indicating his sacred disregard for the invader, Vladimir Putin. “But Larry and I, as Karmic Jesters, hope to bring some fresh air to the invasion and bring attention to how we can all truly help the plight of Ukrainian refugees. That’s why we dropped this song, as Russian bombs continue to drop on innocent women and children in Ukraine. This is an immediate need: refugees are traveling for days, often on foot, with children and very few belongings, lack of nutrition, and desperation in their hearts,” Boggs says.

Larry Boggs, Karmic Jester and older brother to Tim, notes, “This war has hit us at home, connecting us to Ukraine and its people through all the horrific images and reports. There are so many needs. We have been impressed with the stellar work of José Andrés’ World Central Kitchen (WCK), an NGO that devotes itself to the provision of wholesome meals in the wake of disasters. We want to help provide sustenance to the soul with our music, and maybe a little jest, while WCK provide sustenance to refugees fleeing their war-torn country. We sing for their peace.”

"Stick It Up Putin" pokes satirical fun in Karmic Jesters’ signature style and wit as it twangs at the truths, myths, and lies of Vladimir Putin, former mid-level KGB agent-turned-director of the FSB (Federalnaya Sluzhba Bezopasnosti). President Putin, current controller and master of all lives in Russia, launched a “special military operation” on February 24, 2022, which he claimed was to “denazify Ukraine.” Translation: invasion and genocide.

Karmic Jesters, called to action by Ukrainian President Zelenskyy at the Grammy Awards, took up their musical arms to support Ukraine and Ukrainian refugees in the way they inimitably could. In Zelenskyy’s impassioned plea heard ‘round the world, he pondered: "What is more opposite to music? The silence of ruined cities and killed people... Our musicians wear body armor instead of tuxedos. They sing to the wounded. In hospitals. Even to those who can't hear them. But the music will break through anyway. We defend our freedom. To live. To love. To sound. On our land, we are fighting Russia which brings horrible silence with its bombs. The dead silence. Fill the silence with your music! Fill it today. To tell our story. Tell the truth about this war on your social networks, on TV. Support us in any way you can. Any — but not silence. And then peace will come.”

Karmic Jesters heard Zelenskyy, and created, produced, and released "Stick It Up Putin" to support and benefit Ukrainians (via the Herculean feet-on-the ground and kinetic kitchens of World Central Kitchen). Karmic Jesters adapted a tune they were polishing for their new album, due out in October 2022. New lyrics and vocals were recorded and the song soon took on an urgent and important message: "Stick It Up Putin" is a timely pitch perfect kick in the pants to Russia’s President Putin.

About Karmic Jesters
Karmic Jesters is composed of people, namely, Timothy Boggs and his brother Larry Boggs. The Boggs Boys hail from Bartlesville, Oklahoma, but now reside in Los Angeles, where Tim is an as an award-winning supervising sound editor and mixer for Hollywood features and television shows. His work has earned him three Emmy nominations for Fargo, 13th, and Breaking Bad. Brother Larry is a celebrated regional rock ‘n roller, sound engineer and guitarist for bands such as Infinity, the Skeptics, and Hard Rock Candy. He’s also played with Freddy Fender, Ray Price, Little Jimmy Dickens, and Jody Miller. Larry has also mixed and crewed for titans of music, such as Herbie Hancock, Humble Pie, Ivan Neville, and Dwight Yokum. The Boggs’s band’s motto is: "Karmic Jesters — Singing Songs, Playing Music, Making Mischief!" Tim Boggs and Larry Boggs. Who's who? Hey, wait a minute!