Top Cachaça Purchases Distillery in the Heart of Brazil 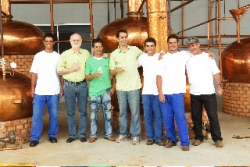 Patos de Minas, Brazil, June 13, 2008 --(PR.com)-- Leblon Cachaça completed the purchase of its State-of-the-Art Distillery in Brazil this week. Located in the heart of the fertile Minas Gerais region, the Distillery will be a showcase for Small Batch Alambique Cachaça production in Brazil, allowing Leblon to meet the ever-growing demand for its luxury Cachaça in Brazil and around the world.

“With our new dedicated distillery, we can continue to employ our unique artisanal techniques while meeting the increasing demand for Leblon,” says Gilles Merlet, Master Distiller and Co-Founder of Leblon Cachaça. The distillery was purchased from Leblon’s previous partner, who has been working with Leblon since its inception.

Available in Brazil, the United States, and parts of Europe and Asia, Leblon is the leading luxury Cachaça in high-end establishments, a 2006, 2007, and 2008 Gold Medal Award Winner at the San Francisco World Spirits Competition, and Best in Class Winner in the 2007 International Tasting Competition in London. In the United States, Leblon is leading the growth of Cachaça, the fastest growing spirits category in 2007. In Brazil, Leblon is leading the creation of a new luxury Cachaça segment in top establishments such as Hotel Fasano, Academia de Cachaça, and Roberta Sudbrack in Rio de Janeiro, and Antiquarius, Parigi, and Casa Santa Luzia in Sao Paulo.

“Leblon’s approach to producing Cachaça is unique,” says Amazile Maia, PhD, top Cachaça expert, founder and managing director of the prestigious LABM lab in Belo Horizonte, Minas Gerais, and former Professor of Biochemical Engineering at the Universidade Federal de Minas Gerais. “Every step of the process is meticulously approached, resulting in a final product that has excellent sensorial qualities.”

Inaugurated this week as the ‘Maison Leblon,’ the new Leblon distillery is located in Patos de Minas, in the heart of the traditional Cachaça producing region of Brazil, Minas Gerais. “We carefully hand-harvest the cane, and within three hours press the cane and begin our fermentation,” says Merlet. “The freshly-pressed cane juice is fermented using proprietary yeasts that convert all the sugars to alcohols, resulting in great aroma and flavor of the cane.”

Merlet, a Frenchman whose family has been producing wonderful spirits and wines in the Cognac region of France for centuries, approaches Cachaça like making a fine wine or Cognac Eau-de-Vie. “We single batch distill the juice, resulting in a spectacular nose of floral flavor and aroma. Then we polish the Cachaça by resting the distillate in vintage XO Cognac casks for up to 6 months,” says Merlet. “Using traditional cellar master techniques, the various batches are blended, adding deep complexity, body, and character to the Cachaça. We then organically triple-filter and bottle in crystalline glass.”

“Leblon is everything that I look for in a true Cachaça,” says Manoel Beato, Top Sommelier of Brazil’s Fasano Group, the top luxury restaurant and hotel group in Brazil. “It has finesse, intense aromatics, creamy finish, and no overwhelming taste of the wood - Belíssima.”

Leblon plans to eventually open the distillery for tours. “I love Brazil, and I am enamored with the potential of Cachaça. We want to share with the world the amazing qualities that this Brazilian spirit has to offer at the highest level,” says Merlet. 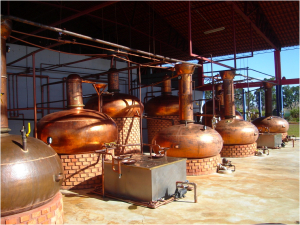 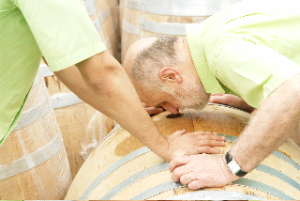