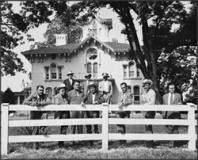 A review of the development of the Brangus breed would take us back beyond the founding of the American Brangus Breeders Association in 1949; however, registered Brangus descend from the foundation animals recorded that year or registered Brahman and Angus cattle enrolled since then. Much of the early work in crossing Brahman and Angus cattle was done at the USDA Experiment Station at Jeanerette, Louisiana -- the first crosses being made as far back as 1912.
During the same period, Clear Creek Ranch of Welch, Oklahoma, the Essar Ranch of San Antonio, Texas, and a few individual breeders in other parts of the United States and Canada were also carrying on private experimental breeding programs. They were looking for a desirable beef-type animal that would retain the Brahman's natural ability to thrive under adverse conditions in combination with the excellent qualities for which the Angus is noted.
The early breeders from 16 states and Canada met in Vinita, Oklahoma on July 19, 1949, and organized the American Brangus Breeders Association, later renamed the International Brangus Breeders Association, with headquarters in Kansas City, Missouri.
One day following the formation of the American Brangus Breeders Association, the July 30, 1949 edition of the Vinita Daily Journal, Vinita, Oklahoma, published a front page article entitled "Pope is named president of Brangus Group." The article went on to read: "Other officers elected here as cattle organization is set up. Raymond Pope, co-owner and manager of Clear Creek Ranch in Northern Craig County was elected president of the American Brangus Breeders Association at the organization meeting for the group held Friday afternoon in Vinita. Representatives from 16 states named Pope to be the first president of the American Brangus Breeders Association at the organization meeting held Friday afternoon in Vinita. Other officers elected at the first business session held at the Vinita Country Club were: Terry Dalehite, Pearsall, Texas, first Vice President; Carl Colwick, Prichett, Colorado, Second Vice President; Jesse Dowdy, Sedalia, Missouri, Third Vice President; and Carlton Corbin, Pittstown, Oklahoma, Secretary-Treasurer."
On January 1, 1973 the IBBA began conducting business from its own office building. The ranch-style, rock building in San Antonio continues to serve as the permanent headquarters of the IBBA.
In 2005, the International Red Brangus Breeders Association became an affiliate association of the IBBA, and the IBBA herdbook was opened to include Red Brangus™. The IBBA herdbook now also includes Ultrablack® and Ultrared™ cattle providing IBBA members and there customers with seedstock choices unmatched by other breed associations. There are now members in nearly every US state, Canada, Mexico, Australia, Central America, South America and Africa.